UKIP Publishes 'Out of the EU and Into the World'

In a document with a central theme that 'the UK does not have to be in a political union in order to trade and other inconvenient truths', William Dartmouth, the UK Independence Party trade spokesman and MEP for the South West Counties and Gibraltar, says that 'the facts are crystal clear, an organisation does not have to be in the EU to trade with an organisation in the EU'.

He goes on to say that 'It should not need saying " a country does not have to be in a political union in order to trade"'.

The paper 'Out of the EU and Into the World', he says, is mainly about trade, but he does go into intra-EU migration and the EU's behaviour towards the UK.

One part of trade that he is at pains to point out is that it is not countries that trade with each other, it is people and businesses that do the trade whether it be within or across borders. He also reiterates that EU businesses sell more into the UK than UK businesses sell into the EU, not a boat that any business leader in the rest of the EU would wish to rock – that then puts paid to the fear-mongering of punitive trade tariffs being imposed on UK businesses.

He also points out that the top ten exporters to the European Union in 2012 according to eurostat and World Bank figures were: China, Russia, USA, Switzerland, Norway, Japan, Turkey, South Korea, India and Brazil. All outside the EU.

William Dartmouth also takes Nick Clegg to task over claims that three million jobs would be at risk. Trade would not cease overnight causing job losses, it would continue and flourish he said. 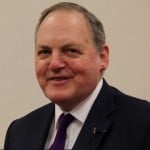 Likening the UK/EU relationship to a marriage, the document asks 'did Britannia make the wrong choice?' Then goes on to examine the grounds for a 'divorce'.

When looking at immigration William Dartmouth makes the point that the successful countries acting like a magnet for the brightest and best from poorer nations within the EU must be hurting those less wealthy nations.

This 90-page publication is long, detailed and full of facts that those wishing to stay in the EU will have to address. It is also a must-read for all those sitting on the fence as well as the many UKIP supporters who wish to argue their corner.

'Out of the EU and Into the World' can be downloaded from the UKIP web-site.

What do next week's company announcements have in store?