Last year some 400,000 people were caught watching TV without a licence and that 180,000 of them appeared in front of a magistrate in a criminal court. That means that 12% of criminal court cases involve the non-payment of the TV licence fee.

Some of it may be from ignorance of the law and some might be chancres, you can take your pick when seeing some of the excuses that have been used like "Why would I need a TV licence for a TV I stole? Nobody knows I've got it".

155,000 people were convicted of the offence in 2012, with a resulting fine of up to Â£1,000 and imprisonment for those who then refuse to pay the fine. It also seems that two thirds of cases are brought against women.

The UKIP Leader of the House in the Lords, Lord Pearson, has called this situation horrifying and is calling for major reform of the way in which the license fee is protected by turning any non-payment offence from the Criminal Justice system to the Civil system.

He is sponsoring a bill (BBC (Trustee Election and Licence Fee) Bill [HL] 2013-14), the aim of which is 'To make provision for election of the trustees of the BBC by licence fee payers; and in relation to civil enforcement of non-payment of TV licence fees.' To be enforced by uniformed civil enforcement officers. 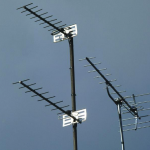 “It is outrageous that so many people are brought in to the criminal justice system through this means." said Lord Pearson "I believe that non payment should be treated in the way that parking tickets are.”

“It is absurd that the courts are being clogged up by such a minor offence” he added.

Lord Pearson’s Bill received its first reading on the 30th of July.

This will of course shift what is on the face of it a huge problem out of the criminal system into the civil law system. But it would ensure that the prison population was reduced or maybe that space was available for more deserving cases.

Parents pay for son to say 'I Do'