UKIP should embrace Thatcherism, not abandon it

In recent months Labour have turned up the volume on their claims that UKIP are “more Tory than the Tories”. They proclaim the party to be some latter day reincarnation of Thatcherism, intent on privatising air, enacting a mass cull of puppies and undertaking other such hateful acts.

This latest attempt to hoodwink the electorate will go the same way as previous ones. The electorate have become tired of Labour’s deception and spin and, for that reason, UKIP should embrace the Iron Lady’s central policies, not abandon them.

Whilst Labour have hastily conducted their campaign, rolling out ancient pictures of Nigel Farage drinking from a mug with Thatcher’s face on it and other such irrelevancies, they must have forgotten to do their groundwork. Lady Thatcher consistently tops polls as the best Prime Minister since the war, whilst these same polls show very few people as able to imagine Ed Miliband holding the office in any capacity.

However, not only is UKIP’s affiliation to Thatcherism undamaging to the party’s prospects, it is also essential. Whilst the other parties have attempted to push UKIP into a Thatcherite niche, UKIP has exploded in popularity and success. Membership has risen from 19,500 in 2012 to over 42,000 today and in May they became the only party aside from Labour or the Conservatives to win a national election since the Liberal Landslide of 1906.

That’s quite some niche. 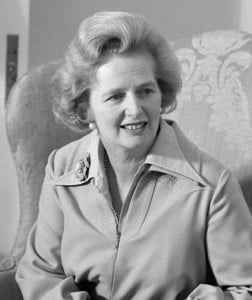 Alarmingly, as UKIP has started to lay out a full manifesto, a move toward the left wing has become apparent.  Flirtations with a luxury goods tax, increasing unemployment benefits and even with the idea of renationalising the railways appeal to ex-Labour voters in the North of England and do not sit with the Thatcherite stereotype, but most importantly show a reaction to Labour’s heightened campaign.

The risk is that, because UKIP’s most stratospheric growth had come about whilst being depicted as heartless, happiness-hating Thatcherites, by leaving this image behind, UKIP will very likely leave voters behind too.

The answer, let’s make it clear, is not to adopt a full slate of Thatcherite policies. The ideology as a whole is badly outdated. However there can be a middle ground. UKIP have an excellent policy in, for example, ensuring that the NHS remains public, but policies such as this can only exist if joined by some key principles of Thatcherism.

Belief in the free market, self-determination and responsible public spending, central to all that is good about Thatcherism, are entirely compatible to UKIP’s brand, and are very popular with the electorate. These are the policies that took Britain from bankruptcy under (guess who) Labour, into a new era of modernity. Not to mention that they helped crush Communism along the way.

The party already supports these ideas, and would easily be able to launch itself as lead by them. This would then not only reclaim the good elements of Thatcherism, but also allow immigration to take a back seat, halting any claim that this is all UKIP can talk about.

UKIP has to be proactive in defining itself as principally a Thatcherite party, altered for the modern day, because Labour’s attempts at doing so will not be enough, alone.

General election on May 6th – or is it?