UKIP Striking While the Iron is Hot

No sooner do we hear that cabinet minister Maria Miller has resigned, than we learn that Nigel Farage is to be the keynote speaker at a public meeting in her constituency this very evening.

UKIP says that Mr Farage's message will be 'strong' and that he will be calling on the voters of Basingstoke to show their feelings at the ballot box.

It will also bee an opportunity to present UKIP's prospective Parliamentary candidate for Basingstoke, Alan Stone.

The meeting will take place at Old Basing Village Hall, The Street, Old Basing, Hampshire, RG24 7DA with public having access from 8 p.m. 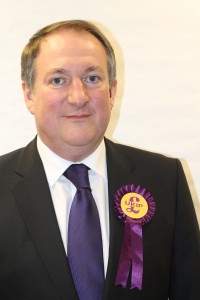 Alan Harvey Stone was born in Frimley in 1964, educated at Sherbourne St John Primary, Hillsea College, Oakley and Queen Mary's College, Basingstoke. He has four children and one grandchild.

Alan runs The Squirrels antiques shop in New Street, Basingstoke, which opened in 1979.

Although active in the past Alan has never before been a member of a political party but is now the chairman and founding member of the UKIP Basingstoke Constituency Association.

Back in 2007 Alan identified 'a marked increase' in people trying to sell gold and jewellery in his area, which when inspected turned out to be brass with a gold-coloured finish to it. He said back then that he believed that much of this was "…being brought in by Romanian refugees and other eastern Europeans that have come to the UK" reported the Basingstoke Gazette.