Nigel Farage has led UKIP’s People’s Army to an outstanding win in the European elections, a win that has left the other three main parties in total disarray.

The Lib Dems look set to implode with a leadership change that would leave them wandering the political wilderness for at least one general election cycle.

Labour is involved in bitter internal wrangling over why they are so far behind the power curve of a win next year, while its leader vows to continue the same old path despite the wishes of the electorate that were so categorically clear for all to see.

The Tories are still adamant that they can deliver some sort of significant change to the EU that would be acceptable to the people of the UK, but knowing that all they can do is tinker at the edges, change a few words then spin like hell to try and sell it to the people as a great win.

All three LibLabCon parties may be worried now but they are terrified that UKIP could gain a substantial foothold in Westminster next year and will do anything and everything to try and prevent it.

The plain fact is that the party of ‘out’ (UKIP) won a handsome victory and the party of ‘in’ (Lib Dems) were virtually wiped from the EU political map. The people have given their verdict and said that enough is enough, the grand EU experiment is over as far as the UK is concerned and the politicians should now be heading for the exit door – or a referendum on it at the very least.

But the LibLabCon set appear to be in denial claiming that UKIP’s stunning success is down to anything but the EU and a symptom of the way it is set up – mass immigration. They say that it is just about the cost of living, that voters are blaming ‘the other’ (effectively branding everyone who voted for UKIP a racist) and that they themselves hadn’t managed to get their massage across to the voters. Consider also that the LibLabCon have their ‘other’ to blame – the rich, the bankers, the poor, the disadvantaged and the feckless and idle UK worker to name a few. 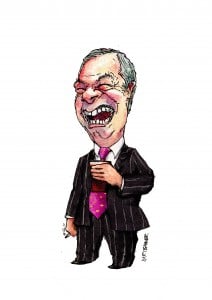 Actually the LibLabCon did get its message across loud and clear – the LibLabCon said and still say that they will march on with the EU project regardless, there may be a bit of a slow down now and then as they toy with a few bits on the periphery to appease the public, but the march to a federal state will continue regardless. You can see it in their eyes and hear it in their words.

UKIP now needs to take the battle to the rest by constantly demanding what the other three parties are doing to realise the aspirations of the UK electorate. Every time they are questioned UKIP spokespeople need to turn it around and ask what the others are doing or saying in response to that overwhelming message. UKIP can say they already have the policy in place – leaving the EU – and that others just refuse to listen. Also UKIP needs to say it has no plans for wholesale change in other areas, remembering that one big change is probably enough for the electorate to swallow all in one go.

Every time past comments on immigration are brought up UKIP should just say ‘we have won that argument as the electorate have indicated. But what are the other three parties, who keep saying UKIP can’t deliver, going to do in response?’

• Show that the proposed government response of further ratcheting down on immigration from the rest of the world, but not the EU, only entrenches us further into the EU and drives the wedge between the UK and every where else even deeper. We would become more cut off in a fortress EU, not more globally engaged.

• Keep on about how stunted our trade is due to our being a part of the EU.

• Remind people that the UK’s most important resource is its people and that policies that leave about a million youngsters out of work is wrong – we need to use them productively.

• Point out that, when the UK leaves the EU, the channel tunnel will not be filled in, ferries will still ply their trade between the UK and Europe and that aeroplanes will still fly from our airports into Europe.

• Trash the lie once and for all that three million jobs are ‘reliant’ on the EU and will be lost, where the report actually said ‘connected with’ – the two are not the same as the author has pointed out.

• Inform more people about the trade imbalance between the UK and the rest of the EU and that they need us more than we need them.

There are of course many, many more.

But there is one thing that UKIP needs to be careful of and that is pressing too much more on mass immigration, which is after all a manifestation of our membership of the EU. Although reinforcing success is always a good strategy, another year of endlessly badgering the people on it may be too much for the sensibilities of UK voters. UKIP has after all got that point well and truly across, but a few reminders now and then would not go amiss.

Image by Gary barker, who doesn't necessarily share the views of the author of the article

The first Fiscal Sustainability Report from the OBR