Speaking on the BBC One current affairs programme, The Andrew Marr Show, yesterday the Labour shadow business secretary, Chuka Umunna, implied that UKIP supporters can’t do the internet and E-mails.

Chuka Umanna invented some dots and then joined them up between a BBC survey that showed one in five people are not capable of operating online and talk of there being communities in Britain that have been ‘disconnected’ from ‘our global economy’. He said it was time for Labour to empower people and get them online, the implication of course being that they would then see the light and vote labour instead of UKIP.

The trouble for Mr Umanna is that the link between the two is not even tenuous, it is non-existent. All he offered was his opinion, no facts to back it up.

Actually, let’s look at some facts as they stand today. UKIP has the fewest members of the three other main parties (Conservatives, Labour and Lib Dems) – for today at least as UKIP may well overtake the Lib Dems in the next few weeks and months. 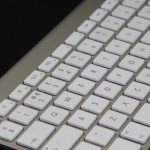 That being the case one would expect, on Chuka Umunna’s assessment, for UKIP to not bother running a website as few people would visit it.

But in fact UKIP does run its own website so let’s compare that party’s site popularity with the others.

For this I’ve used ‘Alexa.com’, which ranks websites from the top most visited (ranked 1) down into the least popular with rankings in the millions. As an example, Google is ranked the most popular at number 1 and Facebook next at number 2. These are generally updated every day or so.

Now let’s take a look at the list below and see where the parties' websites stand today compared to some others. 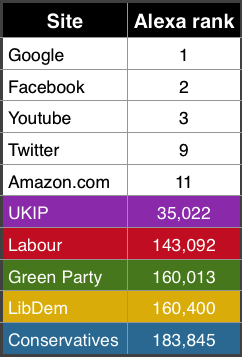 So we can see that UKIP’s site is the most visited of the UK political parties with a rank of 35,022 with the others trailing far behind. But, how can that be if UKIP supporters are so technologically weak-minded?

I though would put another slant on it and say that these rankings show that it is the LibLabCon supporters that are less internet savvy and that, if Chuka shows more people how to use the internet and they start finding information out for themselves, they may well then see the light and start supporting UKIP.

Isn’t it obvious that the UK voting system needs a massive overhaul?