A patriot and a long-standing Brexit supporter, Dr Khong joins UK Independence Party (UKIP) today as he believes UKIP is the only Party with a clear and lasting commitment to British sovereignty and the potential to introduce much needed new approaches to health, social care, international relations and the economy.

Dr Khong qualified in medicine from Sheffield University, holds a Master of Laws from Cardiff University and was awarded Membership of the Faculty of Forensic and Legal Medicine, Royal College of Physicians. In addition to being a GP since 1982, he was also a Police Surgeon to the Leicestershire Constabulary from 1984 to 2005. He is married to Linda and they have three children. 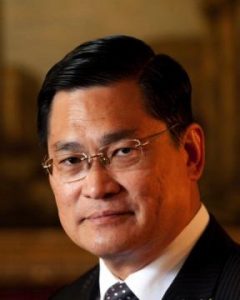 Dr Khong has been involved in a whole range of healthcare policy development. When asked about the breadth of his experience, Dr Khong said, “As a doctor, I am humbled and privileged to care for the entire spectrum of our society in a variety of appointments. I was born in British Malaya, a paragon of racial harmony, and my upbringing has given me an enduring sense of dedication and loyalty to Britain and the Commonwealth. I look forward to serving our country in Parliament, particularly in health and social care.”

UKIP leader Paul Nuttall said. "I'm delighted to welcome Dr Khong to the party. He has a wealth of experience both in healthcare and in politics and will be a great asset. That Tech has chosen to support UKIP at this time shows clearly that the scales are beginning to fall from the eyes of Tories about the vacuum where a serious Brexit policy lies in Theresa May's Conservative Party"

Greens accuse Theresa May of ‘letting the terrorists win’