Dr Julia Reid MEP, UKIP’s spokesperson for the Environment, has expressed concern over the incursion of genetically modified plants into the UK that went largely unnoticed for some time.

This comes after the Department for Environment, Food and Rural Affairs (Defra) launched an investigation into genetically modified orange petunias, which have been on sale in the UK, following a warning from the Finnish safety body Evira.

Although petunias are known for coming in a variety of clear and rich colours, orange is not one which occurs naturally and scientists suspect that the colour is likely to have come from genes extracted from maize.

According to a recent article in Science, the U.S. Department of Agriculture’s (USDA’s) Animal and Plant Health Inspection Service (APHIS) found that the orange petunias contain DNA for the cauliflower mosaic virus (sometimes used to control the expression of an inserted gene) and as this virus is officially considered a “plant pest” plants containing its DNA are subject to APHIS regulation.

Garden centres across the UK, that stocked the orange petunias, have been ordered by the Horticultural Trades Association (HTA) to take the plants off the shelves over concerns that they may be illegal.  It is believed that they were genetically modified without authorisation, however, Raoul Curtis-Machin, the HTA’s head of horticulture, said GM petunias were not dangerous.

In response to this news, Dr Julia Reid MEP said: 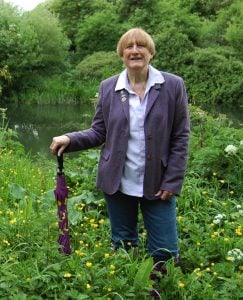 “Although they’re not thought to be dangerous, the spread of these genetically modified petunias across British markets could have had unknown, unexpected and potentially detrimental consequences on our environment, and the flora and fauna that inhabit it, if not discovered.”

“The fact that the sale of these genetically modified petunias went largely unnoticed for some time, despite reports of them being available in catalogues from as early as 2015, is rather worrying.

“Of greater concern is that it took a Finnish safety body to raise the alarm as opposed to our own environmental agency.  What guarantee do we have that there aren’t other genetically modified plants being sold here?  If it took this long to notice that these unnaturally orange petunias were genetically modified, imagine how long it would take to identify GM plants with less visibly noticeable traits.  On this occasion we’ve been fortunate, as although petunias are technically warm climate perennials, in the UK our winter will kill them off, so there should be no danger of them escaping from our gardens.”

Genetically modified crops, in particular, are a controversial matter across the European Union, with more than half the 28 countries in the European Union, including Germany and France, having decided to ban their farmers from growing them.  Several regions, including Northern Ireland, Scotland and Wales have also joined the movement.

In addition to the potentially detrimental effects of GM crops to one’s health, conservationists are also concerned about the effect of GM crops on the ecosystem.  Many believe that the decimation of monarch butterfly numbers is due to the widespread adoption of GM crops which are modified to withstand heavy doses of herbicide.

Furthermore, a recent study found that, in a laboratory environment, the same long-chain omega-3 oils that were engineered into a new genetically modified oilseed variety made cabbage-white butterflies develop with deformed wings.

Regarding the GM orange petunias, Defra is advising gardeners to wait until they die out naturally in winter, as opposed to digging up or destroying them, as it is not illegal for gardeners to own them and if they are spotted on sale, to contact Defra, the GM Inspectorate on Animal and Plant Health, or the Horticultural Trades Association.

Search begins for the world’s best innovations in science, engineering and technology