UKIP’s victory in Clacton last night, and the party’s significant gains in Heywood, could be the ‘starting pistol for short-term financial market uncertainty’, warns the boss of one of the world’s largest independent financial advisory organisations.

The comments from Nigel Green, the founder and chief executive of deVere Group, follow UKIP’s landslide win in the Clacton by-election that was triggered by Douglas Carswell MP’s defection to the party from the Conservatives.

Having secured almost 60 per cent of the vote, he will now return to Westminster as the first-ever elected MP for UKIP.

Mr Green observes: “The historic win for UKIP has rocked the British political landscape – with just seven months to go until the general election. 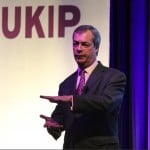 “The landslide win in Clacton and the huge upswing in Heywood makes the general election even more unpredictable to call.

“The results in Clacton and Heywood could serve as the starting pistol for short-term financial market uncertainty as they could prompt further defections to UKIP and, more generally, embolden the Eurosceptic movement in Britain which is of course pushing for Brexit.

“Brexit risks have increased due to last night’s results and the momentum that they will create.  The markets will undoubtedly be concerned by this outcome to some degree as it changes the political status quo, and this is likely to be reflected in volatility up until the general election.

“Investors would be wise to monitor this uncertainty carefully with their financial advisers.”