What better recruiting sergeant for UKIP can we have than the European Convention on Human Rights and its courts.

Abdullah Ahmed Ali, on of the UK’s most dangerous al-Qaeda terrorists, wants the Strasbourg court to rule that his conviction be overturned on the basis that his human rights were infringed.

What he is claiming is that the jury in that trial would have been prejudiced by media coverage from a previous trial.

Although this case is still in the early stages many see this as a potentially unwarranted intrusion into the sovereignty of the UK. If he is granted a full hearing it will undermine the UK courts (was the ECHR really established to do this) as well as costing the hard-pressed taxpayer yet more money on the already £100 million spent on it. It won’t do the reputation of the ECHR much good in the UK either.

Then, should the court find in his favour it would open the flood-gates for others to have their convictions quashed.

The Justice Secretary, Chris Grayling, has stated that the Conservatives will go into the next election with a promise to abolish the Human Rights Act. All well and good but that will not change how the ECHR interferes with the UK justice system.

As members of the ECHR we have to have rules that reflect that membership and which recognise its courts – there’s no way out of that either. 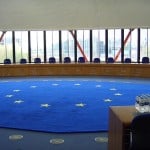 ECHR court room by Djtm at the German language Wikipedia

So, any repealing of the Human Rights Act would be followed by something else but extremely similar to it.

You would think that, given the Tory stance on ‘renegotiating’ our position in the EU prior to a referendum on membership, they would promise to ‘reform’ the ECHR. But the fact that they are railing against it so much with threats of abolishing the Human Rights Act it must be clear to all that they realise this cannot be done. They will instead mislead the UK public into thinking they are doing something substantive about it.

Nothing of substance will change in our relationship with either the EU or ECHR while we lurch from Lab to Con back to Lab with a bit of Lib sprinkled in occasionally. All that we will get is the usual hand-wringing and empty promises from the usual suspects.