If one was to believe the picture that most Western media outlets are painting, Ukraine has been lost to Russia. Though the country fought valiantly to sign an Association Agreement with the European Union in Vilnius, Lithuania last month, President Viktor Yanukovych suspended negotiations with the EU at the last possible moment, betraying Ukrainians everywhere. Two recent energy deals that Ukraine has reportedly made, one with Russia and the other with Slovakia, however, show that the reality of the situation is slightly more complex.

Claiming that Yanukovych had always wanted negotiations with the EU to fail would arguably be giving him and his advisors too little credit as political strategists. In terms of public opinion, signing the Association Agreement would have all but secured Yanukovych's re-election in 2015, whereas his step down from the deal has visibly shaken his legitimacy as President to its core. Rather, too little attention is given to the very real economic pressure Russia has placed on Ukraine and the EU's reluctance or inability to offset Putin's ‘trade war'. Furthermore, while Yanukovych did not sign the Association Agreement in Vilnius, he did not commit his country to Putin's rival ‘Eurasian Union' either.

Prior to the Vilnius Summit in November, the Ukrainian government found itself between a rock and a hard place. On one hand, Russia was imposing exorbitant gas prices and devastating economic sanctions on Ukraine's already fragile economy. By October 10th, 2013, trade between the two countries had fallen by 25% and prices for Russian gas, on which Ukraine remains dependent, stood at $420/1000 m3, $50 more than the European average. On the other hand, EU leaders refused to hold tripartite negotiations with Russia and Ukraine, instead using all their leverage to insist that jailed former Prime Minister Yulia Tymoshenko, convicted of abuse of office and embezzlement in 2011, be freed.

All of this comes on top of Ukraine's dire situation. The country faces $10 billion in principal and interest payments next year and has the third-highest default probability in the world [1]. In an address following his decision to suspend negotiations with the EU, Yanukovych stated, "I would have been wrong if I hadn't done everything necessary for people not to lose their jobs, receive salaries, pensions and scholarships.” While many Ukrainians and outside observers may not take the President's words at face value, it is no lie that, had Ukraine signed the agreement, economic disaster would have been imminent. 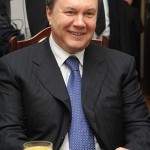 As there was little the EU could/would offer to offset the immediate Russian reprisals on Ukraine's economy, the government renounced signing the Association Agreement. However, two gas deals currently in the works show that, far from being sucked forever into Russia's orbit, Ukraine will continue to flirt with both East and West and, most of all, move towards energy independence.

While the exact details of the deal Yanukovych has hammered out with Russian President Vladimir Putin in Sochi last Saturday remain unknown, Edward Lucas, the international editor of The Economist claims that gas prices for Ukraine will be brought down to $200/1000m3 while $5 billion cherry payment on top. Lucas also claims that Yanukovych has promised that Ukraine will join Russia's customs union as part of the deal, though this has been virulently denied by the Russian administration. At the same time, payments for Russian gas transferred from Gazprom to Naftogaz between October and December 2013 have been deferred until the Spring of 2014, all of which gives Ukraine some much-needed breathing room.

On the Western front, however, Ukraine agreed on the conditions for a gas deal with Slovakia for importing European Union gas through Slovak pipelines. These new flows, including gas from Poland and Hungary, could exceed 10 billion cubic meters annually, enough to meet Ukraine's entire import needs. The move, which has long been heralded as a strategy to curb Ukraine's energy dependence on Russia, comes less than two weeks after negotiations with the EU broke down, questioning the dominant narrative that the Ukrainian government is content to sign itself away to Moscow.

By. Scott Belinksi for Oilprice.com

New Generation of Over 50s Emerge as Entrepreneurs