The credit rating agency Moody’s has given the chancellor and the country a wake-up call today by changing the UK’s outlook to ‘negative’.

This move could result in a future downgrade of UK debt and therefore increased cost on the huge mountain of borrowings the country has as and when it needs to be rolled over.

The FTSE and sterling fell not unexpectedly on the news.

Moody’s cited a ‘weaker macroeconomic environment’ for its decision.

The UK was not the only one hit, the credit rating agency cut Spain’s rating by two notches as well as cutting the ratings of several other Eurozone countries – Italy, Malta, Portugal, Slovakia and Slovenia – by one notch.

Although Germany’s rating was said by Moody’s to be ‘appropriate’, it added France and Belgium to the ‘negative’ outlook list along with the UK.

The European Financial Stability Facility (EFSF) remains unscathed by Moody’s for the moment.

Overall Moody’s was concerned about the ability of the Eurozone to address its problems, which would of course have an adverse effect on the UK. Especially as the Greece crisis rolls on.

Bart Oosterveld, the managing director at Moody’s sovereign risk group, is quoted by Reuters as saying that the impact on the markets of a Greek exit from the Euro ‘would be quite profound’. 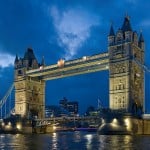 He also said that the ECB’s three year refinancing operations may not halt the slide of the European credit markets.

This move by Moody’s follows the one Standard & Poor’s made last month when it downgraded a whole raft of countries including France, Italy, Spain and Austria. But unlike Moody’s, S&P also downgraded the EFSF by a notch as well.

But the bookies may still be on the side of the UK keeping its AAA status. William Hill is offering odds of 6/4 that the UK's AAA financial credit rating will be lost before June 1, 2013, but reckon it is a 1/ 2 chance that it will be retained until then. 'We believe it is more likely than not that the Triple A rating will remain despite predictions that it could be vulnerable during the next 18 months' said William Hill's spokesman Graham Sharpe.

Image by Diliff (Own work) [CC-BY-SA-3.0 or GFDL], via Wikimedia Commons