From first to worst. Gold and silver were the best assets to own during the first decade of this century. During this second decade… not so much. Precious metals bulls have endured 4 years of prices drifting lower punctuated by periodic smash-downs and the occasional false-breakout.

What really gets the goat of gold and silver investors is that, throughout this time, there have been very good fundamental reasons to own metals. Somehow those fundamentals never show up in the price. The price action in recent years is enough to make bulls question reality.

Given that bankers and high frequency traders have criminally rigged the metals markets, people should question the long-term viability of these low prices. Expecting the fraud and manipulation in markets to continue indefinitely while physical inventory continues to evaporate isn't much of an investment thesis. The reasons to own precious metals are more compelling than ever.

Dollar-destroying debt and deficits are set to continue growing exponentially.

The Republicans who now control Congress quietly passed a budget that completely suspends their self-imposed borrowing limit. They didn't just raise it by a few hundred billion, they removed the cap entirely for two years. Many expected Republicans would oppose increases in deficit spending now that they are in charge. After all, there was so much wailing and gnashing of teeth in prior budget battles with Democrats.

However, Congress has raised the debt ceiling 74 times since 1962. When faced with the choice of limiting spending or hiking the limit, Congress has voted to abandon fiscal restraint 100% of the time. It's safe to say deficits and borrowing shall persist.

All of this adds up to bad news for the dollar. Why? Because the Fed enables unlimited government. It is the purchaser of last resort when it comes to government debt, and it is the champion of artificially low interest rates. Congress would have long ago been forced to tighten its belt without the Fed pumping new dollars into the system and reducing the borrowing costs of world's foremost debtor.

Metals are priced as if $2 trillion dollars had not been added to the money supply.

The Fed began the second round of Quantitative Easing in November 2010 and spent most of the next two years buying $600 billion in U.S. debt. Central bankers' encore was the $1.4 trillion dollar Treasury and mortgage-backed security buying spree called QE3. Over the course of those two programs, the Fed created $2 trillion, but you would never know it by looking at metals prices today. The currency inflation failed to boost gold and silver spot prices, and the dollar is stronger than before – for the time being.

We now know those programs were designed and implemented as a stimulus for major banks, not the economy. The Fed paid generous prices for the banks' garbage – mortgage-backed securities they stuffed with fraudulent loans. They bought Treasuries, using the banks, unnecessarily, as intermediaries and gifting them huge fees.

Today, $1.7 trillion printed and paid to the banks during QE2 and QE3 sits on deposit with the Fed as excess reserves. To top it off, officials decided to pay the banks interest on those funds, and they are paying a rate much higher than banks are paying you for your deposits.

Wall Street got that cash and, for the moment, they are happy to be sitting on it and collecting the interest. Someday, perhaps when Fed officials decide to stop paying banks to hold those funds on reserve, the massive inflation in the money supply will manifest in higher prices.

Markets should be looking forward to the day when the $1.7 trillion floods out of the Fed and sweeps through the economy. Metals prices and the dollar should reflect this inflation in waiting. But they aren't.

Precious metals supply will fall until prices rise to much higher levels.

Steve St. Angelo with the SRSrocco Report estimated the average break-even cost [1] for the 12 largest primary silver producers at $17.16/oz in the first quarter of this year. Since then, the cost of oil has fallen slightly, but the revenues silver miners are getting from sales of base metals and gold as byproducts are also declining. The all-in cost of producing an ounce of silver is likely higher than $17.16 now.

Silver prices need to rise 15% – 20% just for the average producer to break even. Marginal producers with higher costs are in even more trouble. Silver production is already in significant decline. Gold production appears set to peak this year globally and is falling now in the U.S. That trend is set to accelerate, because low gold and silver prices aren't the only problem.

Base metal miners are also suffering. Much of the mine supply of precious metals – particularly silver – is produced as a byproduct of mining for base metals such as copper and zinc. Those markets are having severe problems of their own. Copper prices are the lowest they have been since the depths of the 2008 financial crisis. Given that copper's wagon is hitched to the weakening Chinese manufacturing sector, the outlook there is not good.

Gold and silver prices are not sustainable at these levels.

Paper-to-physical-gold ratios are at extraordinary highs.

Something stinks in the futures markets. The ratio of paper gold futures contracts to physical gold in COMEX vaults has exploded in recent weeks. Nearly 300 ounces of paper gold now trade for every ounce of physical metal available to actually deliver. This ratio is almost triple the highest levels seen previously, and it has happened over just the past two months. 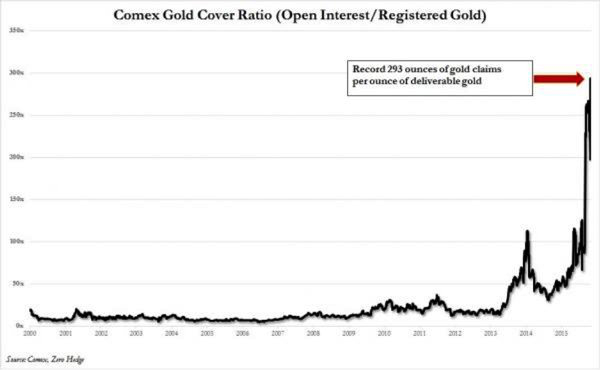 Futures contracts, like the dollar, are supported only by confidence. As soon as traders, who seem oblivious at the moment, realize just how little gold is available to deliver, they may regret trusting so blindly.

Many bullion investors expect a day of reckoning in the futures markets where investors who are long gold stand for delivery of more bars than there are in the vaults. Those who are short gold will scramble to cover their short position, or come up with the actual gold.

Given the minuscule amount of physical gold available, it is likely a whole lot of COMEX traders will get a hard lesson on the difference between paper and bullion.

Clint Siegner is a Director at Money Metals Exchange, the national precious metals company named 2015 "Dealer of the Year" in the United States by an independent global ratings group. A graduate of Linfield College in Oregon, Siegner puts his experience in business management along with his passion for personal liberty, limited government, and honest money into the development of Money Metals' brand and reach. This includes writing extensively on the bullion markets and their intersection with policy and world affairs.