The University of Sheffield will this week host a Parliamentary Select Committee where leading academics and students will discuss concerns about low voter turnout and how to encourage people to engage with politics ahead of next year’s General Election.

The House of Commons’ Political and Constitutional Reform Committee will visit the University’s Arts Tower on Thursday (5th June 2014) to speak to local organisations and individuals as part of its current inquiry into voter engagement in the UK.

During a drop-in session from 12.15pm-1.15pm, members of the committee will ask why so many people don’t vote, to what extent public perception and the media portrayal of MPs and the Government turns people off voting and what can be done to encourage more people to turn out at the polls.

Professor Flinders, from the University’s Department of Politics and Founding Director of the Sir Bernard Crick Centre for the Public Understanding of Politics, said: “Levels of political inequality seem to be increasing.  Recent research, for example, suggests that less than 20 per cent of those aged between 18 and 24 are currently planning to vote in the General Election next year. 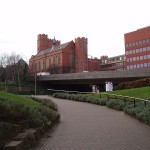 “It is in this context that the Political and Constitutional Reform Select Committee's inquiry into voter engagement in the UK was established.”

He added: “This committee of MPs is trying to get a deeper understanding of patterns of political behaviour in order to consider what might be done to increase levels of political engagement across all social groups.

“At a time when anti-politics seems almost fashionable, the Committee clearly has a big challenge to grapple with.

“However, the University of Sheffield has a proud and long-established reputation not just as a civic university but also as a 'centre of excellence' for the analysis of political engagement and it is wonderful to welcome the House of Commons' committee to the city.”

He added: “If my generation keeps voting in the proportions it is, then it won’t be long before Governments are going to start holding little to no legitimacy.

“Obviously there are much deeper issues contributing to this, but a revamp of the way we do democracy may spur heightened interest from the younger generations.”

Limited places are available to watch the evidence session.

To register for the event, visit https://www.surveymonkey.com/s/H22NLBK and complete the registration form.

Places for the evidence session are available on a first come first served basis. If a waiting list is formed then further places will be allocated if they become available.

For more information on outreach events and the work of the Political and Constitutional Reform Committee, visit www.parliament.uk/outreach.

Want to Give Up on Picking Stocks and Just Play the Market? Here’s How