Chris Longbottom, director at Kantar Worldpanel, comments: "Aldi's year-on-year growth rate accelerated to a record 33.5% meaning the retailer now accounts for 4.3% of the market while Lidl held on to the record 3.2% it reached last period. Despite this, Waitrose shrugged off the pressure from the discounters with its highest ever market share of 5.0%.

"Over the past three years Waitrose, Aldi and Lidl have taken a combined 3.5 share points from the competition which equates to £4.4 billion per year. This has put pressure on the big four supermarkets to compete for a shrinking middle ground and cut prices to directly combat the discounters."

Among the big four, Sainsbury's was the only retailer to hold its market share year-on-year at 17.0% and match the overall market growth of 2.2%. Tesco, Asda and Morrisons all recorded declines in share with Tesco and Morrisons also seeing a drop in actual sales. 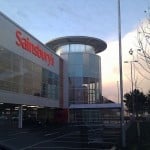 The Co-operative has improved on historical performance with positive sales growth of 0.7% and only a marginal drop in share to 6.1%.

The overall grocery market growth of 2.2% represents a further fall from last period which was the lowest since mid-2005. Falling inflation is the main contributing factor behind this with the Kantar Worldpanel measure now standing at 1.9% – the lowest level since July 2010.

An update on inflation:

Grocery inflation stands at 1.9% for the 12 week period ending 2 March 2014. This is at the lowest level since July 2010 and offers some respite for hard-pressed household budgets.