It is amazing how different investor sentiment can be around the globe regarding just one topic: gold bullion.

Most of you are quite aware that the price for gold bullion here in America has dropped significantly this year. One could come to the conclusion that investor sentiment has left the precious metal for good.

However, looking at investor sentiment for gold bullion on an international basis, the picture is very different.

Just recently, the premium for gold bullion in India hit a record $100.00 an ounce above London prices. The demand for gold is so high in India that the supply for physical gold is running out. (Source: "Gold Premiums Hit Record in India," Reuters, October 15, 2013.)

As most of you are probably aware, the Indian government has tried to clamp down on imports of gold bullion to try and stem the outflow of their currency, which is causing the rupee to drop significantly.

People in other nations are not experiencing the same type of price drop in gold bullion. In fact, in India, the rupee has dropped so far that gold prices are still near their record highs.

Will investor sentiment shift in favor of gold bullion once again versus the U.S. dollar?

Obviously, no one can predict the future, but we can all agree that the path America is moving towards is unsustainable. Just recently, China once again voiced its concerns and called for the end of the U.S. dollar as the reserve currency for the world.

With trillions of dollars of debt piling higher and higher, gold bullion may once again be seen as an alternative to the U.S. dollar—if our fiscal situation does not change.

In no way am I suggesting that America will become India anytime soon. America has a tremendous amount of advantages in the world, including a talented and highly educated workforce, some of the leading technology companies in the world, and vast natural resources.

Unfortunately, we are only as strong as the weakest link. And I think it's quite obvious that the weakest link is our politicians in Washington. Because of what I've seen over the past few decades in Washington, I think adding gold bullion to a portfolio for the long-term makes sense, especially now that it's "on sale" here in America compared to the rest of the world. 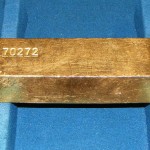 Over the long term, such imbalances do work themselves out. However, over the short term, price imbalances will occur, and it takes a patient investor to ride out the storm.

Hopefully, our elected "leaders" can come to their senses and actually formulate a plan that makes sense and can help put America back on the right path.

Since I have yet to see any such plan put in place (kicking the can doesn't count), having some gold bullion as an insurance policy might be the smartest move one could make right now.

Why Now Is the Opportune Time to Invest in Gold