Even when gold rallied from below $1,300 to $1,365 after the Federal Reserve decided to not begin tapering its bond buying at the September Federal Open Market Committee (FOMC) meeting, I refused to jump on the band wagon. It just wasn’t the right time.

The problem, in my view, was a lack of reasons why I should buy. In fact, buying into equities in mid-September would have offered investors returns, while losses mounted in gold.

Now, I keep reading about how China is buying more and more gold. Rumor has it that the country is building a big safe-house in Shanghai that could store up to 2,000 pounds of the shiny metal. Sorry, but I’m still not quite convinced that gold is a buy right now. I’m still not impressed.

China has over $3.0 trillion in cash and needs to do something with it. For China, buying U.S. Treasury bonds may not be the best idea, given that the U.S. government appears to be a mess and debt levels just keep rising. So that just leaves gold—luckily, the Chinese love the metal.

Tensions in the Middle East appear to be quiet, but you never know when a conflict could arise, especially with Syria being accused of playing the rest of the world with its agreement to allow the destruction of its chemical weapons. On top of that, Iran is still a major threat with its nuclear development. These tensions could strain supply, inevitably driving gold higher.

Yet for now, gold is only a speculative trade. I would not be adding the yellow ore as a buy-and-hold strategy. However, investors can consider buying on weakness as it falls towards $1,250 and selling on surges above $1,300. 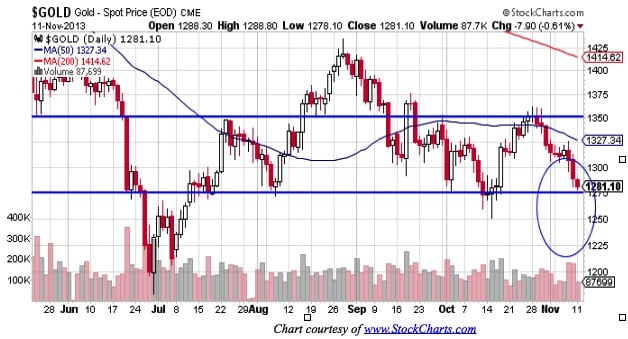 The one big negative for those bullish on gold has been the absence of strong inflation around the world, in spite of the trillions of dollars of easy money pumped into the global economy. The theory was that record-low interest rates and cheap money would drive massive consumer spending worldwide; hence, prices would rise and voila, inflation. So far, however, this has not occurred. Consumers just aren’t spending enough to significantly boost inflation. 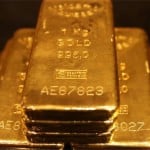 n reality, I’d say we’re actually more under the threat of deflation and declining prices than we are close to inflation. Without rising inflation and threats that would normally shove me closer to gold bullion as hedge, I just don’t see a reason to buy and hold the yellow ore.

The only way I see gold moving higher right now is via speculation. But again, I doubt prices would hold after a spike, unless the underlying market fundamentals change. With markets heading higher on a lack of fundamentals, this could, of course, easily change with a market correction.

In the end, the bottom line is that I would not be buying gold as a buy-and-hold strategy at this time. However, investors could trade it on weakness down toward $1,250 and sell on strength. If prices surge to above $1,300 to $1,350 or above, shorting the yellow metal as a speculative trade may be an option.

This article Update: Gold a Boon for Speculative Traders was originally published at Investment Contrarians