US Credit Rating Downgraded to Same Level as Brazil?

The U.S. government, after winning World War II for the Allies, was very convincing. It told central banks around the world that they should hold the U.S. dollar as their reserve currency instead of gold, based on the idea the U.S. dollar would be backed by gold. Only limited amounts of U.S. dollars could be printed, because the currency was tied to gold bullion. Central banks bought into the idea.

Unfortunately, a few decades down the road, the concept of a U.S. dollar backed by gold was thrown out the window (thank you, President Nixon). Eventually we were introduced to the modern day printing press—printing money out of thin air at the will of the Federal Reserve without the U.S. dollar being tied to any “hard” currency like gold.

Why would anyone agree to this horrible idea?

Back in those days, the U.S. economy was prospering. Our government was in good shape and didn’t have much debt. And the logistics made sense, too, as time passed. Why wouldn’t a central bank have in its reserves the currency of the world’s strongest economy and military? Why wouldn’t a central banker keep U.S. dollars in his vault as opposed to hard-to-carry and hard-to-store gold?

Years have passed since the U.S. dollar “unglued” itself from gold. Things have changed, too. America is not so glorious anymore. Ever-rising debt and the never-ending printing of U.S. dollars have resulted in some countries changing their policy on U.S. dollar-backed reserves. And the fundamental factors that keep the U.S. dollar strong are deteriorating quickly.

The chart below shows the change in nominal gross domestic product (GDP) and the change in U.S. debt year-over-year (yoy) on a percentage basis. You can quickly see that U.S. debt is rising at a much faster pace than GDP. 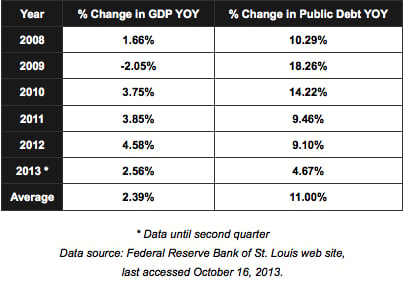 As the chart above shows, we have U.S. government debt rising 360% faster than economic growth! GDP in the U.S. economy has been increasing at an average annual rate of 2.39% over the past six years, while government debt has been growing at an annual pace of 11% since 2008.

The mainstream doesn’t talk much about the situation I’ve just outlined above. But the obvious fact is this: the stock market rallies when it hears government debt will increase or the Federal Reserve will print more money; the stock market drops when government spending or money printing is in jeopardy.

But things are changing outside the United States.

My belief is that central banks are losing trust in the dollar. Central banks could be realizing the devaluation of the U.S. dollar is inevitable, and thus, they are moving away from the greenback as illustrated by the chart below. 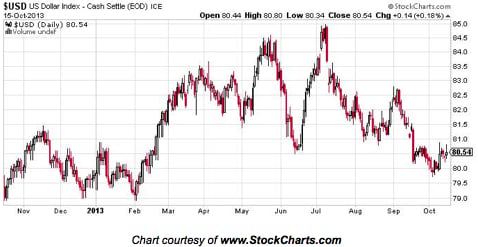 Just recently, the European Central Bank (ECB) and the People’s Bank of China built a bilateral currency swap line. Through this swap line, which will last three years, 350 billion yuan will be provided to the ECB and 45 billion euros will be given to the central bank of China.

The ECB, in announcing this deal, said, “The swap arrangement has been established in the context of rapidly growing bilateral trade and investment between the euro area and China, as well as the need to ensure the stability of financial markets.” The central bank added, “From the perspective of the Eurosystem, the swap arrangement is intended to serve as a backstop liquidity facility and to reassure euro area banks of the continuous provision of Chinese Yuan.” (Source: “Press Release: ECB and the People’s Bank of China establish a bilateral currency swap agreement,” European Central Bank, October 10, 2013.)

What will be the next move for central banks around the global economy? Do you really think they will continue to buy currencies that can be printed out of thin air? I doubt it.

This morning, we got news China’s Dagong Global Credit Rating agency cut its credit rating on the U.S. by one notch, stating the debt ceiling deal struck by Congress fails to solve America’s debt problem. The downgrade put the U.S. at the same level as Brazil, Israel, and Panama.

The bottom line here? The U.S. dollar is in trouble. Congress has kicked the debt ceiling problem down the road again, this time until February of 2014. Meanwhile, gold is having its best day of the month. A new trend? Maybe even a permanent one.