UK Housing data might have surprised to the upside yesterday but the Pound suffered as Bank of England (BoE) interest rate hike expectations were pushed back beyond the first quarter of next year. Sterling slid against the majority of its counterparts, registering particularly notable losses against the rebounding commodity currencies. This morning’s only British ecostat, Nationwide House Price numbers, disappointed on the month by printing at 0.3% instead of 0.4% but came in at 3.2% on the year rather than the 3.1% anticipated. Disappointing German figures helped the Pound recoup some of its losses against the Euro but Sterling continues trending in a weakened position against the US Dollar.

Wednesday saw the Euro experience fairly mixed trading, with the common currency initially consolidating previous gains against its main rivals before fluctuating in response to comments issued by European Central Bank (ECB) Executive Board Member Peter Praet. The ECB official asserted that the central bank stands ready to take action if the recent developments in China have a negative impact on the Eurozone’s inflation outlook and the prospect of further stimulus initially weakened the common currency. Today’s German Import Price Index fell short, revealing a month-on-month decline of -0.7% and a year-on-year dip of -1.7%. The data had been expected to print at -0.3% and -1.4%.

After US data exceeded expectations yesterday the US Dollar experienced a reversal of fortunes and broadly advanced. The asset had previously been pressured lower by speculation surrounding what impact the developments in China are likely to have on Federal Reserve policymaking decisions, but the unexpectedly strong Durable Goods Orders print kept hopes of a 2015 adjustment alive. Although Durable Goods Orders had been expected to drop by -0.4% in July, the report revealed growth of 2.0% and a positive revision to June’s number. Should this upbeat result ensure that US second quarter growth data is upwardly adjusted (as was already predicted to be the case) the US Dollar’s uptrend is likely to continue.

The Australian Dollar was trending higher across the board on Thursday; with the GBP/AUD pairing falling back to trade in the region of 2.16 as risk appetite increased following policy intervention from the People’s Bank of China (PBoC). Additionally, although Reserve Bank of Australia (RBA) Governor Glenn Stevens’ latest comments on Australia’s economic outlook were fairly downbeat, he did indicate that central bank policy adjustments can only do so much to support the nation – remarks which were taken to mean that another interest rate cut isn’t on the cards at the moment. Australia’s Private Capital Expenditure figure for the second quarter (-4.0% vs. a -2.5% prediction) had little impact on the ‘Aussie’ during the local session. 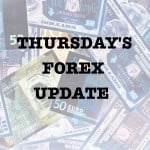 With action in China increasing demand for higher-risk and commodity-driven assets, the New Zealand Dollar was able to continue its uptrend against peers like the Pound and US Dollar. While yesterday’s encouraging US report did initially see the ‘Kiwi’ slump, the currency recovered during the Australasian session. However, should today’s US second quarter growth data give US interest rate hike expectations a shot in the arm, it’s possible that the New Zealand Dollar could reverse the gains initiated earlier in the week by improved domestic two-year inflation expectations.

There may have been a dearth of Canadian ecostats yesterday but the ‘Loonie’ was still able to register an almost four-cent daily gain against a struggling Pound, taking the GBP/CAD pairing away from the eight-year high struck on ‘Black Monday’. The Canadian Dollar managed to hold and extend gains despite a dip in the price of Canada’s key commodity, crude oil.

With traders responding positively to rate cuts in China, the Rand registered additional gains against the US Dollar and Pound. The South African currency slumped to record lows vs. those two rivals at the beginning of the week and the South African Reserve Bank has asserted that; ‘in the event of developments that threaten the orderly functioning of markets or that may have financial stability implications‚ the [Bank] may consider becoming involved in foreign exchange markets to ensure orderly market conditions.’

One pint and you're out!

The sleaze and cost of politics