US Dollar continues its bullish rally

The US Dollar continues to maintain its bullish rally, with most of its peers hitting multi-month lows providing no respite, especially to the Euro and the British Sterling as we head into the most busiest part of the week starting tomorrow with key monetary policy reviews from Japan, Eurozone and the UK and the all important NFP data on Friday. Despite a better than expected construction PMI, the Cable weakened closing yesterday at lows of 1.6468.

• Switzerland quarterly GDP came out unchanged at 0% growth, down from previous quarter’s 0.5% growth and below the median estimates of 0.5%.

• US ISM manufacturing PMI rises to 59, beating estimates of 57

• China non-manufacturing PMI was soft at 54.4, up from previous month’s index reading of 54.2

• Australia’s GDP q/q showed stronger growth by an increase of 0.5% against median estimates of 1.1%. The quarterly GDP declined from the previous quarter which expanded by 1.1%

• Australia’s yearly GDP increased 3.1% against median estimates of 3% but lower from previous yearly GDP of 3.5%

The BoC is widely expected to keep its overnight interest rates unchanged at 1% while it is expected that the Central bank will maintain a neutral-dovish tone. In regards to future rate hikes, BoC governor Poloz noted at the Jackson Hole symposium that the BoC will be pursuing its own path and would not be following the Fed’s interest rate path. Canada saw an upbeat second quarter GDP which expanded at 3.1% annualized, beating the BoC’s projections of 2.5% growth. Inflation on the other hand eased to 2.1% from the previous month’s high of 2.4%. Later this week Canada’s monthly labour market data will be released. 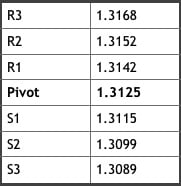 The EURUSD is likely to weaken further, at least until the ECB press conference. Weekly support comes in at 1.3107 followed by the second support at 1.30765. Historically, pivot support comes in at 1.31055 from where we could see a minor retracement. The continued fall of the Euro is likely to indicate that the market is pricing in an ECB QE announcement later this week which could prove to be a lot riding on Draghi’s shoulders. 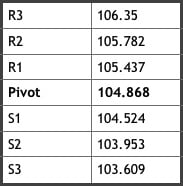 The Yen has continued to weaken against the Greenback. Tomorrow the Bank of Japan will be announcing its monetary policy statement but nothing significant is expected which is supportive of a weaker Yen. Then USDJPY is likely to find resistance near 105.4 – 105.5 until the NFP data is released this Friday. Overall, the USDJPY is bullish in the run up to the US labor market data. 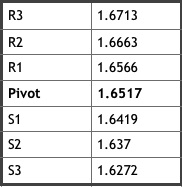 The Cable shrugged off a positive construction PMI reading and weakened towards the US trading session. It must be reminded that on September 18th, Scotland votes on a referendum for independence which is proving to be a close call at this point. A break away from the Union is likely to weigh in on the British Sterling as well as bring in a lot of uncertainty to the currency.
The Cable is likely to weaken into the BoE’s interest rate statement due tomorrow, which could breathe some life into the currency pair which enjoyed a stellar rally last year.

John is a market analyst for Orbex Ltd. and is a forex and equities trader having been involved in trading since late 2009. John makes use of a mix of technical and fundamental analysis and inter-market relationships. The analysis present here is a mix of intra-day analysis while considering the long term outlook of the markets as well. For any comments or questions, John can be reached at john@orbex.com

Freedom and choice for defined benefit scheme members: new options but no exodus