A peer-reviewed research paper from Tufts University (Massachusetts, USA) has made dire predictions about the impact of  the Transatlantic Trade and Investment Partnership (TTIP) on Britain  and Europe.

The controversial deal being negotiated between Washington and Brussels has been promoted by David Cameron as a necessary boost to the British economy, but the paper by Jeronim Capaldo predicts the deal will actually mean job losses, lower growth, lower wages and a more unstable economy.

The report predicts that the long-term (10 year) impacts of TTIP would include:

• The average working person in Britain would be over £3,300 worse off as a result of lower wages

• Ordinary workers would lose out but profits and rents would increase. In total 7% of GDP would shift from labour to capital. 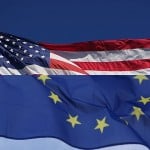 Combined with lower GDP and a greater exposure to fluctuations in the US economy, the report predicts greater use of austerity policies, further forcing down of wages, a lower tax take, higher government deficits, spiralling asset prices and exacerbation of social tensions.

Negotiations on TTIP have provoked strong opposition, with over a thousand actions taking place across Europe on Saturday 11 October, with a thousand people protesting in Parliament Square, London and dropping a banner across the length of Westminster Bridge. In little over a month, more than 800,000 people across Europe have signed a petition calling on the deal to be scrapped.

Jeronim Capaldo, the Senior Researcher at the Global Development and Environment Institute at Tufts University who carried out the research, said:

"According to our study, TTIP will exacerbate, not solve, Europe's economic problems: increasing unemployment, worsening inequality, reducing workers' purchasing power, undermining the dynamism of intra-EU trade, and exposing European countries to asset bubbles and financial contagion from the United States. At this fragile time in Europe's economic recovery, TTIP looks like a mistake."

"TTIP falls down even on its own terms, as it's supposed to bolster growth in the EU, but in fact it will result in fewer jobs and lower wages. The research shows that some will actually benefit – profits for a small number of corporations grow at the expense of ordinary workers. This is truly a deal for the 1%, and we have to stop it."