There is an accepted wisdom that the most used or spoken language in the world is Mandarin Chinese. After that comes a close race between English and Spanish.

But now, China Daily [1] reports that, according to English First one of the world's largest language teachers, over 300 million Chinese are now learning English. That is nearly a quarter of the countries 1.33 billion population.

Should that level of English learning continue it is possible that the number of English speakers in China alone could outnumber the those on the rest of the planet.

Within the next five years all state workers under the age of 40 will have to have mastered a minimum of 1,000 English phrases. All kindergartens will also be required to have started teaching English within this time frame. Many parents who can afford it are sending their children, many as young as two, to private lessons in the hope that they will become fluent at an early age.

But some fear that this push will be held back by a dearth of good English teachers, the country's backward teaching methods as well as the Chinese test-oriented teaching system. 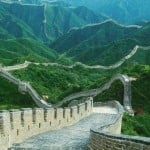 Yang Luxin, professor at Beijing Foreign Studies University and researcher at China's Foreign Languages Research Center, said "Despite 300 million Chinese studying English, only a minority can speak English very well. Chinese students spend a lot of time studying – not just a few hours a week, but a lot more, but the problem is the teaching methods of the teachers and their proficiency in English".

Cleve McKenzie moved from Jamaica to China eight years ago and says "Unfortunately, a lot of foreign English teachers in China are here for an adventure or are just travelling through on a holiday and don't take the job seriously."

But there is another old wisdom, that if you throw enough muck at a wall some will stick.

China Daily points to a survey conducted by one of the country's largest websites, Sina.com, where a huge 86% of parents expressed the wish to send their children overseas with 51% of them favouring the US followed by the UK, Australia and Canada.

According to the report 'For young urban Chinese, topping up their English skills has become a priority'.

Now there's an emerging market if I ever saw one! The private English school sector in China is expected to grow between 12% and 15%. The will to learn and get their children to learn is definitely there, but they need more than just a few gap year students and travellers turning up for an short adventure.

Half of Divorced Brits Considered Leaving Their Partner at the Altar

Top cities to live in Middle East, Australia and Europe