'Utopia' by John Pilger released in UK on 15th November

One of the most extraordinary films about Australia is soon to be released in the UK. This is Utopia, an epic production by the Emmy and Bafta winning film-maker and journalist John Pilger.

Utopia is a vast region in northern Australia and home to the oldest human presence on earth. ‘This film is a journey into that secret country,’ says Pilger in Utopia. ‘It will describe not only the uniqueness of the first Australians, but their trail of tears and betrayal and resistance – from one utopia to another’. Pilger begins his journey in Sydney, where he grew up, and in Canberra, the nation’s capital, where the national parliament rises in an affluent suburb called Barton, recently awarded the title of Australia’s most advantaged community.

Barton is named after Edmund Barton, the first prime minister of Australia, who in 1901 introduced the White Australia Policy. ‘The doctrine of the equality of man,’ said Barton, ‘was never intended to apply to those who weren’t British and white-skinned.’ He made no mention of the original inhabitants who were deemed barely human, unworthy of recognition in the first suburban utopia.

One of the world's best kept secrets is revealed against a background of the greatest boom in mineral wealth. Has the 'lucky country' inherited South African apartheid? And how could this happen in the 21st century? What role has the media played? Utopia is both a personal journey and universal story of power and resistance and how modern societies can be divided between those who conform and a dystopian world of those who do not conform. 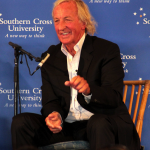 Utopia draws on people and places Pilger first filmed 28 years ago during his long association with the indigenous people of his homeland. The evidence he produces is often deeply moving and shocking.

Utopia is produced by Dartmouth Films and released in association with Network Releasing. The cinema release is 15th November 2013. ITV will broadcast Utopia on 17th December. A DVD with an extraordinary collection of interviews and sequences not in the final cut of the film will be released by Network at the same time.

Utopia will have its premiere at the National Film Theatre (BFI South Bank) on 3rd October.

Creeping Flesh – The Skin I Live In