The music from Vedran Smailovic's cello soared through the battered ruins of Sarajevo, offering a glimmer of hope to its war weary citizens and to people around the world as they watched the four year siege drag on.

The cellist took great risks when he decided to sit in the street and play his cello in honour of his friends and neighbours who had been killed by an exploding mortar while lining up for bread.

Mr. Smailovic's actions illuminated hope around the world and the name, “The Cellist of Sarajevo”, was born.

Canadian author, Elizabeth Wellburn, later read about Vedran's story and wanted to collaborate with him on her children's book, “Echoes From The Square”, and she reached out to find him.

Vedran didn't have a permanent address to call home, but with a bit of effort and some good luck Elizabeth was able to track him down in London, England. I had been invited to do the paintings for the book and so I accompanied her.

We spent a week in London taking photos and getting a deeper understanding of the circumstances that led up to his act of defiance in Sarajevo. It became clear to us that Vedran was a man with a difficult history and a complicated personality.

After an intense week in London, I travelled with Vedran to Warren Point in Northern Ireland, where he soon decided to establish his home. The Irish musician, Tommy Sands, kindly offered the use of a stone cottage for Vedran to live in and both artists soon collaborated musically on the CD, “Sarajevo to Belfast” among other projects.

Over the years I watched Vedran consistently lock horns with some of his closest friends, and I begun to understand why Yo Yo Ma described him as, “….. a real present–day hero whose spirit I greatly admire”.

As I find myself thinking of that quote, the more I understand Vedran and the realities of heroism. It is easy to place people who have done something amazing on a pedestal. We also need to understand that people are human and heroes possess the same kind of flaws as everyone else. Vedran certainly has his share. One can love what the person has accomplished without liking everything about them.

The author, Steven Galloway, and his new book, “The Cellist of Sarajevo”, ran into problems with Vedran when the book was released. Steven contacted Elizabeth and me to ask our opinion on the matter. Vedran had threatened to burn his cello in protest because he felt that Galloway had “stolen his story” and used his name without permission. I felt that Vedran had a point but I also felt that Galloway was an honest and talented young man with no intentions to steal anything. I thought it would be nice to get them together because I have always thought that communication is important for all conflicts and that one should try and understand the other person's needs. I volunteered to go with Steven to Northern Ireland and introduce them to each other, which Steven agreed to.

We arrived at the hotel and, in time, Vedran also arrived. He refused to shake Steven's hand which felt awkward for both Steven and me.

Mr. Smailovic clearly needed to get his feelings off his chest and proceeded to do just that.

But, as the Guinness began to flow and perform its magic, I could see that both Steven and Vedran were understanding each other's position a little bit better.

At the end, they even shook hands. Vedran had made his point and Steven had listened. It was a small success.

It seemed ironic watching two people, who have contributed so much to the idea of peace, engage in a war of words and so it is no small wonder that our world leaders, with such vast differences in their national interests, find themselves head to head and on often on the verge of war.

Marshall Rosenberg, (Nonviolent Communication) said, “Conflicts, even of long standing duration, can be resolved if we can just keep the flow of communication going in which people come out of their heads and stop criticizing and analyzing each other, and instead get in touch with their needs, and hear the needs of others, and realize the interdependence that we all have in relation to each other. We can't win at somebody else's expense. We can only fully be satisfied when the other person's needs are fulfilled as well as our own.”

I am not completely sure that Vedran or Steven's needs were fully met during that meeting. Vedran has earned international respect. He created the Cellist of Sarajevo for many personal reasons, but I believe that he also wanted the world to understand what was happening to his city.

Vedran makes it clear that he does not want anyone to profit from the tragedy of the people of Sarajevo. He wants to be recognized as more than just “The Cellist of Sarajevo”. He is a musician, a composer, an artist and a father.

Steven Galloway has also earned international respect. He needs the freedom as a creative writer to investigate human interactions and, just as Vedran had done, he wanted to share that with the world. Like most artists, he simply wants to do his work.

I believe that early communication between these two artists would have gone a long way in avoiding the conflict between them …….. and that it is never too late. 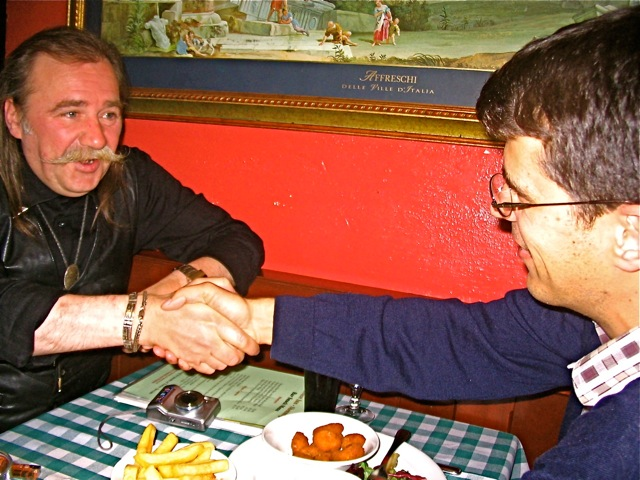 The Adjustment Bureau – a film review