In fact what she said was that ’75 percent to 80 percent’ of our laws are made by EU institutions, see the video below.

Now, many people may disagree with her, but bear in mind that any legislation we pass in the UK is always constructed or interpreted through the prism of EU law and, where there is a conflict, EU law is deemed to take primacy under various treaties that we have signed up to.

In effect this means that, unless we leave the EU, all our laws have to be ‘EU compliant’ in order to be effective. Where they are not compliant they will be construed by the courts in a compliant way. It matters not how they were drafted or what the intent behind them. 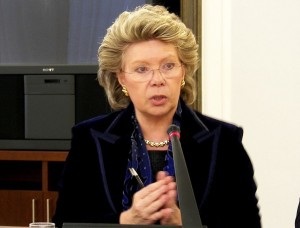 "This is a slam dunk moment for those of us who have been saying that a large majority of our laws are made by Brussels. “One of the most senior European Commissioners has admitted exactly what Nigel Farage told Nick Clegg in their televised debates. There is no ambiguity about her words either. The only thing she is not sure about is whether it is still 75% or now as much as 80% of our laws that are made by the EU. UKIP invites you to watch, listen and judge for yourselves.”

This of course leaves the Deputy PM, Nick Clegg, to explain to Ms Reding (and the people of the UK) why she is wrong. Maybe he needs to point her in the direction of the House of Commons Library piece he is so fond of (mis)quoting.

It is now up to the people of the UK to decide if they care whether UK laws are made in Brussels or not and vote accordingly.

Retail sales steady and jobs on the up – CBI