* Martin Luther King (25%) tops poll of greatest ever change-maker, ahead of Nelson Mandela (21%) and Emmeline Pankhurst (11%)

With the ongoing debate over who will lead the Conservative Party at the next election, current leader and Prime Minister David Cameron has won a vote of confidence from Britain’s youth, ahead of rival Boris Johnson.

One in seven young Brits aged 16 – 21 have named the Tory leader the top British change-maker currently making a difference to society, a survey of over 1,300 youngsters by youth charity vInspired finds.

The poll was bad news for the other party leaders with Deputy Prime Minister Nick Clegg securing only 3% of the votes from those who will be the youngest voters at the next election in 2015. Labour leader Ed Miliband trailed in last place with just 1%, while UKIP leader Nigel Farage did not feature in the voting.

The charity polled young people in the run up to its vInspired Live event on July 6. The event, which will be headlined by Professor Green, combines music, inspirational speakers and a huge social media campaigning action.

Young people are being asked to choose between four young campaigners, competing for the chance to have their cause represented at the event. Attendees will take part in a social firepower experiment, where they will use social media to spread the campaigner’s message to as many people across the word as possible.

Each young campaigner has been paired with a mentor to help make their dream a reality.

The finalists’ ideas range from bringing self-esteem lessons into the school curriculum to asking business men and women to give up their time to voluntarily mentor young people, helping them to create business plans and empowering them to start their own business. 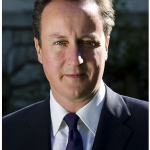 Blessing Maregere, Emma Norris, Eliza Rebeiro and Sophia Kichou are working with Dominic McVey, Kate Walsh, Gemma Cairney and Jamal Edwards to drive votes on vinspiredlive.com for campaign to win the chance of a lifetime.

Alongside the headline performance from UK rapper Professor Green, the event will include talks from the likes of Brooke Kinsella MBE and Levi Roots and be hosted by presenters Rick Edwards and Gemma Cairney.

When asked who young people believed was the greatest change-maker of all time, key civil rights campaigners took the top three spots with Martin Luther King (25%) ahead of South African Nelson Mandela (21%) and the leader of the British suffragette movement Emmeline Pankhurst (11%) in third. The late Princess Diana secured 5% of the votes.

The four finalists for vInspired Live will be hoping that one day they will be muttered in the same breath as these with their big idea having a lasting impact on society and make a change for the better for their generation.