UK unemployment continues to fall and now stands at a record low of 4.4%, and while wage growth has come in slightly better than expected at 2.1%, inflation is still outpacing our earnings. In the post financial crisis world, wage growth continues to be the missing piece of the puzzle.

For the past ten years our earnings have flatlined as the below chart shows. This could be down to automation, more people working part-time and the growing cohort of self-employed people with limited earning power, such as Uber and Deliveroo drivers in the so-called ‘gig economy’.

Unfortunately the outlook doesn’t look much brighter for Britain’s workers. The latest report from Chartered Institute of Personnel and Development says employers are predicting an average of 1 percent increase in wages in the next year*, while the Bank of England has pointed out that uncertainty over the economic outlook may be affecting companies’ willingness to raise pay – it expects regular pay growth to remain subdued for the rest of 2017. 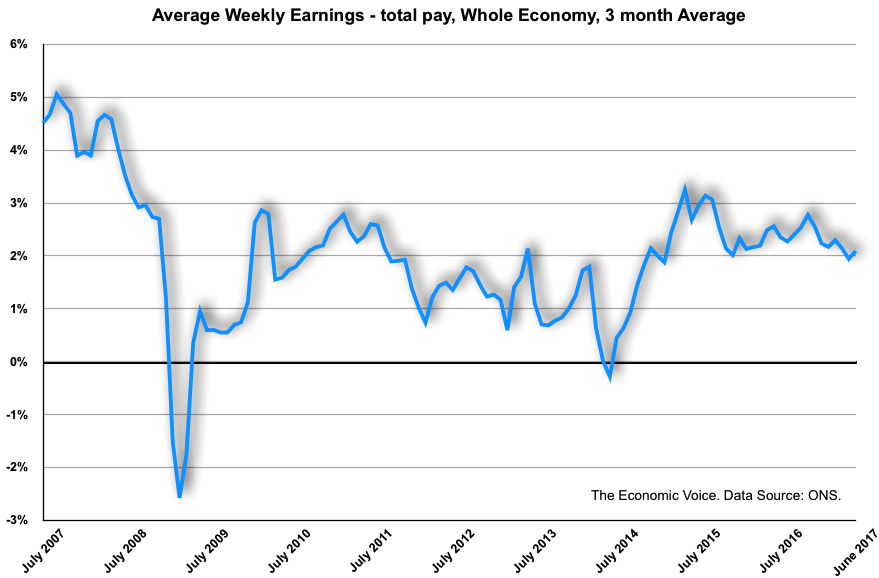 Paltry wage growth coupled with stubbornly high inflation, means our earnings continue to lag price rises. As each month rolls by UK households are getting progressively poorer. This means our savings and investments need to work even harder. Be careful of leaving your money languishing in cash. It may be a safer option than the stock market but with lower-for-longer interest rates, it’s likely you’ll be losing out over the long term.

Pay and pensions: public vs private