As the weather turned colder this week, customers turned to more comforting food with sales of slow-cook meat up nearly 56 per cent. Sales of ready meals also increased by 13 percent with Indian ready meals performing particularly well, up 41 per cent on last year.

With Easter round the corner, shoppers appear to be making more health motivated choices when it comes to their Easter treats. Sales of gluten free hot cross buns and Waitrose’s gluten free Easter egg have both soared in popularity, up 124 per cent and 890 per cent respectively. 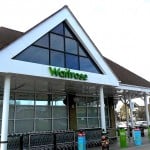 Easter decorations are up 73 per cent on last year and customers were also preparing gifts for one another as sales of gift wrap increased 27 per cent. As shoppers prepared to bake Easter treats for their friends and families, sales of Easter home baking kits also increased, up 10 per cent.

With warmer weather on the horizon, horticulture sales were up over 13 per cent compared to the year before, as customers prepared their gardens for spring. Seasonal British produce will also be at the forefront of customers’ minds as spring favourites Jersey Royals and British raspberries become available in Waitrose shops this week.