The Israeli team coach is Eli Guttman, and its stars include defender Tal Ben Haim (I), who plays alongside Welsh international Simon Church at Charlton Athletic FC. Wales ended Israel's winning start to UEFA EURO 2016 qualifying and will hope to maintain their push for top spot in Group B when the sides reconvene in Cardiff on 6 September.

In conjunction with the game, the photographic exhibition "Low football – Jewish-Arab football: diversity and coexistence through lower-league football”, is opening today at the new Central Library in Cardiff.

Kaduregel-Shefel, translated as peripheral or ‘low’ football, is a photographic project attempting to find the places where a passion for true football exists. Inspired by the lower leagues in England, Gad Salner and Vadim Tarasov, two friends, have explored Israel’s Jewish and Arab diversity in football through this unique project. 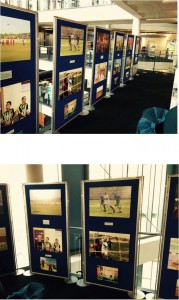 The project began when the two started a journey to visit Arab villages in the north of Israel, and dusty Jewish neighborhoods in its south. The focus is less on the pitch action itself, but rather on the culture and atmosphere that surrounds it, and the way they relate to local football.

Gad Salner and Vadim Tarasov said: “From forgotten Arab villages in the north to dusty Jewish neighborhoods in the south, we visit places where the seemingly ever-present tension between cultures evaporates, and where diversity is embraced, encouraged and celebrated. The exhibition puts more emphasis on the human, urban and cultural landscapes of our divided and diverse society, and less on the pitch action itself”.

One example in the exhibition is Betar Nordia Football Club in Jerusalem. It is a fan-owned club which plays in the 5th league and to date has more than 200 club members.  They promote diversity and sportsmanship, while opposing violence and racism in football. The club’s Jewish participants play alongside their Arab Muslim and Christian colleagues.

The exhibition will be showing at the New Central Library Building in the Hayes, in Cardiff, from September 2nd  to September 9th.

It is unfortunate that we are also anticipating an anti-Israel demonstration in Cardiff, which does nothing to promote coexistence in the Middle East or to foster dialogue. Promoting hatred and a divisive ideology, is not only foreign to the sport of football and to sports in general, but cannot advance the cause of peace between Israelis and Palestinians.

We welcome people to visit the exhibit, to see how football promotes coexistence in Israel, bringing Jews, Muslims and Christians closer together, and promoting peace.

Blogging 101: A Simple Guide to Get You Started