Ever wondered why Ed Miliband and Wallace (of Gromit fame) are never seen together on chat shows? That's because they are in-fact one and the same person.

Ian Rottweiler who is aÂ  researcher for The Daily Something Or Other unmasked the minister for melting ice caps and light bulbs with startling new DNA evidence that proves he is in-fact the star of many a British animation.

Up until now Ed has managed to keep his true identity a secret by not making too many television appearances and ensuring no one can take a sample of his DNA, which he masks with a fake compulsive cleaning disorder.

Mr Rottweiler who noticed his Mr Miliband's strange ability to fall into a northern accent and his ability to invent useless objects on the spot was a clue that he was actually leading a double life so he decided to follow him for 3 months and stake out his house.

However Ian was amazed when one night he watched as Ed's moonlit silhouetteÂ  appeared on the rooftop of his house riding a flying motorcycle and sidecar with wings attached. 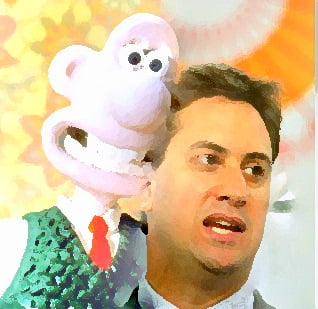 Then a dog raised his head from within the sidecar and off they flew into the night.

Later that week Ian found his opportunity to test Ed Miliband's DNA at a cheese sampling evening at a climate change conference at which Ed was the guest of honour. Ed had managed to consume half a Stilton but due to an allergy to scientific fact he coughed up a large portion of the blue veined cheese some of which was caught on Mr Rottweiler's jacket.

Ian could not believe his luck and being the dimwitted chap that he is the following morning he took the suit for DNA profiling to find out if there was anything out of the ordinary to be found.

After 3 days of analysis Professor Arken PulseratÂ  arrived at the conclusion there was definitely plasticine in the DNA and denied there could have been any contamination of the results, which he carefully checked time and time again in his Lab that also serves as a part time nursery playgroup for under fives.

These results were sent to Downing street via carrier pigeon but no response has yet been made by the government who are probably preparing to hide the truth or prevent it from coming out by some kind of distraction like a nuclear strike on Guernsey.

Tonight's Question Time resulted in 300 billion telephone calls of complaints by parents who were concerned that, after watching the show their children all became chronically depressed and unresponsive thanks to seeing their hero on television without his faithful side kick Gromit who they fear he may have killed.