As I braved the Olympic hordes to crawl into work this morning – in fact, the Jubilee line was quieter than usual – I picked up a copy of a well-known free London paper on the way in. No, not Metro. It was the other one, which claims to be ‘business with personality’. Personally, I have wondered before now whether the entire paper serves as a way for the editor to promote himself (although live on stage, he is not very impressive).

On this first full week day of the Olympics, the FT led with growing concern from foreign business leaders about the state of the UK economy. Cameron is trying to use the games to entice foreign investment into the UK, but CEOs are not idiots (by and large). They are questioning the wisdom of investing in an ailing economy, with several calling for an outright change in policy – a proper economic Plan B. Even Richard Lambert, the highly respected former head of the CBI, has called on Chancellor Osborne to change tack, pointing out that the UK’s AAA rating is now under threat from a lack of growth, rather than the need for a deficit reduction plan. The chancellor is coming under ever-mounting pressure.

In contrast, the lead story in the paper I picked up was ‘House prices on the slide’. This surprised me, as I think house prices have broadly been going sideways for a few years now, so I read the article with interest. Once again I was left despairing at the state of British journalism.

The article referred to the Hometrack house price index, which to start with is not an especially great series. Hometrack, like Nationwide and Halifax, measure house prices at the ‘mortgage approval’ stage, rather than when contracts or exchanged or transactions completed. Their data cover England and Wales, and are based on a survey of just 1,500 estate agents, who are of course one of the most honest and reliable sources of information around. (In contrast, Nationwide and Halifax actually track the loans they approve.) The Hometrack measure has also only been going since 2001 – among the pantheon of house price indices, it is not so much the little brother as the distant cousin. In terms of data sourcing, backrun and sample size, there are reasons to be cautious about taking it literally.

What is more, the article actually referred to prices falling by just 0.1% in July 2012. Yes, that’s right – prices fell by a whopping one-thousandth of their value on the month. This was the first fall for seven months.

Given all the debate about GDP data over the past week, most people are by now aware that there is normally some degree of statistical uncertainty around most data series. The ONS helpfully provide gauges of this in terms of information about past revisions, but also in terms of the ‘coefficient of variation’ (CV) for a data series. These latter estimates give an idea of how much noise versus how much genuine news there is in a data series. The less noise there is, the lower the CV and the more useful the data series is as a means of gauging what is actually happening. In contrast, if there is lots of noise in the data, and the CV is high, drawing any sort of inference can be very difficult. 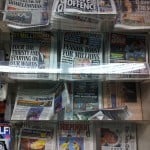 Using data since 2002, I estimate that the CV in the Hometrack price index is around 5. If anything, this figure is likely to suffer from downward bias – ie be too low – given the sample size. A CV of 5 is pretty high, and suggests that the Hometrack house price index has an awful lot of noise in it. Drawing any particular message from the data will therefore be difficult, and any sensible analyst would be very cautious about coming to any conclusions from one month’s data.

None of this stopped City AM, of course. They took a tiny fall in a minor house price index in one month, which was well within the normal range of noise and uncertainty for that data series, and ran with it as their main headline. Not for the first time, I find myself wishing that we had journalists that actually understood statistics reporting the news.