• Over-55s have lower levels of consumer confidence than general population

UK consumer confidence has improved to its highest point since August 2007, new figures from YouGov and the Centre for Economics Research show. However, in the wake of last week’s Budget with measures aimed at older people, the data show that the over-55s are still struggling with relatively low levels of economic confidence.

The analysis finds that only 11% believe their household financial situation will improve over the next 12 months compared to 21% of the general population. The figures suggest that one of the reasons for this is that because their economic wellbeing is less tied to improvements in the labour market they have felt fewer of the benefits of the jobs-led recovery.

YouGov/Cebr’s findings show there is still an air of caution among older consumers. Almost half (49%) believe there will be no change in their household’s finances over the next year, explaining why the majority (56%) would save a windfall rather than spend it (20%).

However, the research, based on YouGov’s economic tracking data, shows that the government’s proposed changes in pensions could lead to a slight increase in older peoples’ spending power. Over-55s are much less likely than the general population to use a windfall to pay off debts, largely because they have fewer debt commitments to meet.

‘Despite being such a major part of the economy, older people are the most wary consumer group as the recovery gains ground. Over-55s tend to be asset rich but cash poor and are further behind other consumers when it comes to feeling the benefits of the upturn. Although many think the economy in general is improving, they are sceptical about their own financial situations. A large number of over-55s expect things to get worse and few expect them to get better. It remains to be seen if last week’s Budget proposals on pensions and savings will see an increase in their consumer confidence.’

Charles Davis, Director at the Centre for Economics and Business Research:

‘Older consumers are a major part of the economy, contributing about half of consumer spending. However, they are still being tentative as the recovery gains ground, as shown by their lower levels of consumer confidence than the population in general. This is party driven by the fact that their economic wellbeing is less tied to improvements in the labour market. As a result, they are feeling fewer benefits from the jobs-led recovery.’

The YouGov/Cebr Consumer Confidence Index increased again this month, improving to 111.6, an improvement of +0.9 points since February. Overall consumer confidence is now at its highest level since August 2007.

Consumer confidence among the over-55s still lags behind that of consumers overall. Its current level – 106.3 – is at the same level the overall figure was last August and over the past five years it has, on average, been 7.1 points lower than the score for the general population. 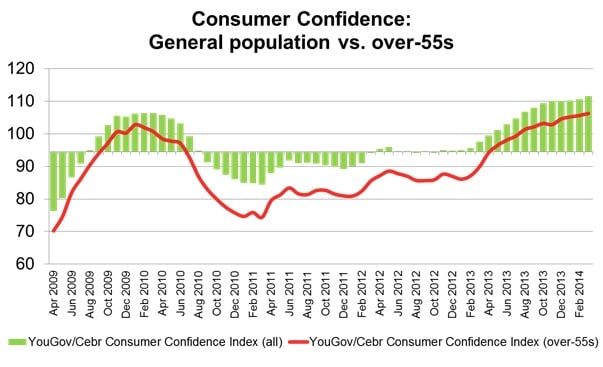 Older consumers’ lower levels of confidence and greater wariness are driven in part by their cautious expectations for their household finances over the next 12 months. More over-55s think their lot will get worse compared to consumers overall (40% against 32%), and only 11% of older people think their lot will get better, greatly below the level for the general population (21%). However, almost half (49%) of over-55s believe there will be no change, similar to the levels for consumers overall (47%). 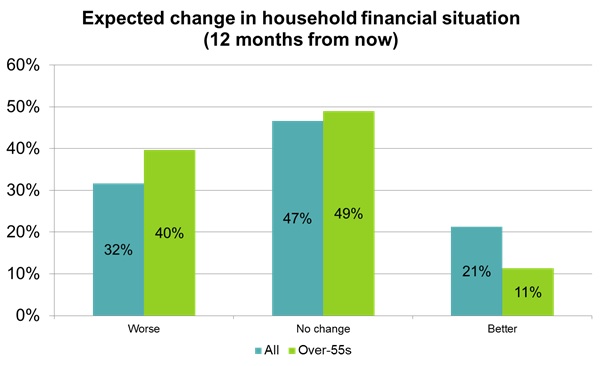 How people would spend a windfall payment

In light of the government’s plans to give people with pensions more control over how they would use their funds, YouGov’s data shows that the majority (56%) of over-55s would save a cash windfall, a slightly higher figure than for the general population. Just under a quarter of older consumers would use it to repay debt, notably lower than consumers overall (33%). One in five (20%) over-55s would spend the money compared to one in seven (15%) of the general population. 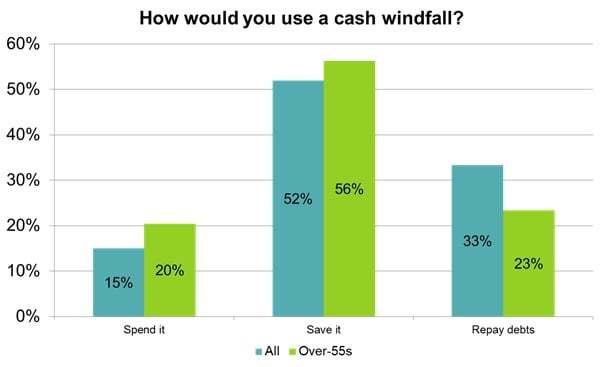 YouGov/Cebr’s analysis suggests that one of the reasons older consumers are still cautious about the recovery is that they have more diverse sources of income. This means their economic wellbeing isn’t as closely tied to improvements in the labour market as the population in general. As a result, they have felt fewer of the benefits of the jobs-led recovery. 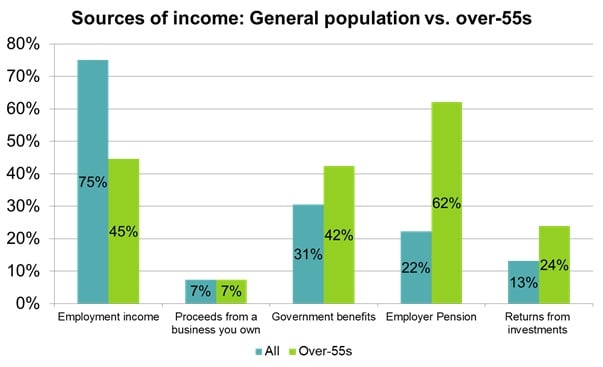 Another tax purposely designed to bail the banks out