Water Cannon Could be Deployed in London

Boris Johnson, the London Mayor has written to the Home Secretary, Theresa May, informing her that he has started to gather opinions on the use of water cannon within the capital for use during the ‘most extreme circumstances’.

The result is that, if agreed by the Home Secretary, the Met police could have the use of three German made water cannon by the summer at a cost of £30,000 each before they are modified for use in the UK.

If this goes ahead it could result in water cannon being used for the first time on the UK mainland. These machines have though been used in Northern Ireland only since 2001.

It appears that this is in response to the 2011 riots in mainly in London, sparked by the police shooting of Mark Duggan, where five people other people died and that led to so much damage being caused.

However, one should not forget that afterwards the head of the Met, Bernard Hogan-Howe, said that the use of water cannon was ‘not the answer’. And a Home Office report (www.parliament.uk/documents/commons-committees/home-affairs/HC%201456-I%20Final%20Report.pdf) did say that the police operation to combat the riots was ‘flawed’. So what has happened to change the thinking?

A quick look at the performance of a water canon vehicle as well as the range of the cannon itself will also show just how limited its use would be. It is acknowledged that they would be ideal for use in static or slow moving situations where they could also be protected. But that did not appear to be the situation in 2011 where, for nearly a week, thousands of people across several London boroughs as well as other towns and cities ran riot. At the end of the day it took the deployment of large numbers of police and the dealing out of instant harsh justice to quell the rioters. 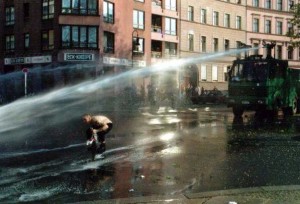 Water cannon by Eilmeldung at the German language Wikipedia

Could three water cannon, if available back then, have prevented those riots? Would their existence actually have been a deterrent to the rioters?

Water cannon are also dangerous to those they are used against and can cause broken bones and internal injuries. There is a case of one person being nearly completely blinded by one in Germany.

So you have to ask how rioters would react to these devices being used against them and, if serious injury was caused, would their use not just exacerbate the situation? Remember also that with social media these things could easily be tracked and avoided – unless you shut mobile networks down during the event of course and what effect would that have on the rest of the city?

We don’t have many riots in the UK and I don’t see anyone warning about them either, so why?

Should the Europeans just give up?

When is mediation Appropriate?