The latest diktat from the EU Commission reads like something from a sketch out of Yes Minister.

According to the Express, two German scientists Dr Moritz Hagenmeyer and Dr Andreas Hahn, of the Institute for Food Science and Human Nutrition at Hanover Leibniz University, tried to get approval for the claim that “regular consumption of significant amounts of water can reduce the risk of development of dehydration”. But, on the basis that reduced water levels in the body was a symptom of dehydration and not a risk that drinking water could control, it was rejected.

I just don’t get this; surely there is a risk that not drinking water leads to dehydration? Or are they just being pedantic and saying you can take in water via food or mixed with other substances in the form of juices, so claiming drinking just water will rehydrate is misleading.

Whatever the case this is still a maddening and ridiculous waste of time and money, which could be better allocated and spent at this particular time. Very Penn and Teller.

The whole Eurozone has hit a massive economic iceberg that has holed it below the water line filling it with debt and all the EU officials can do is rearrange the water bottles in the bar.

And they wonder why we get upset when the EU wants to keep dipping its hands ever deeper into our pockets for more and more money to spend on its frivolities!

EU spokesman David D’Arcy said “Of course drinking water is essential for health and the commission is not stopping anyone from saying so. This is a specific case with specific characteristics. Either way the final decision is for member states.”

Oh, that’s all right then. But knowing our government we’ll end up with the normal ‘gold plating’ of EU rules meaning that our laws will be far more stringent that anyone else’s. Would it really surprise you to see all new household taps in the UK coming with a health warning stamped on them? 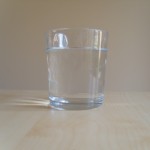 WARNING-this glass of water may not rehydrate you!

Paul Nuttall, UKIP deputy leader, sits on the European Parliament’s Public Health Committee and said “I had to read this four or five times before I believed it. It is a perfect example of what the EU does best and makes the bendy banana law look positively sane.”

Now, about that other extremely dangerous substance; that horrible mix of Nitrogen, Carbon Dioxide, Oxygen and Argon amongst many others? You know-air. Does that mean under EU law that breathing in air does not control the risk of hypoxia?

Ah well, there’s always other mixers for the whisky!