“Waves of Grace”, a story told in Virtual Reality about Ebola survival and recovery in Liberia

Leading virtual reality production company Vrse.works is unveiling its latest film in collaboration with the UN Millennium Campaign and Vice Media. Waves of Grace follows a young Liberian woman’s struggle to thrive during and after the recent Ebola epidemic.

Waves of Grace calls attention to the formidable obstacles that Ebola survivors still face, despite having survived and recovered from the disease.  The film transports viewers to West Point, the most populous slum in the capital of Liberia, and follows the experience of Decontee Davis, an Ebola survivor who uses her immunity to help others affected by the disease.  The film was created by Chris Milk with UN collaborator Gabo Arora, and produced by Patrick Milling Smith and Samantha Storr.  It is part of a larger initiative of the UN Millennium Campaign to fight donor fatigue on the world’s most pressing challenges.

Vrse.works is a specialized production company, co-founded by Chris Milk and Patrick Milling Smith that supports the world’s leading creative innovators in virtual reality and spherical filmmaking. The Vrse.works collective of artists, technicians, thinkers, and innovators strive to create the best experiential media and most original immersive experiences by utilizing custom built tools and technology. 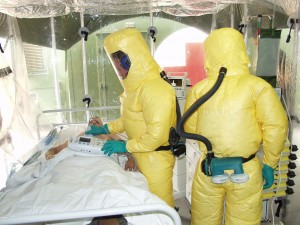 The Vrse companies have also launched a platform / app named Vrse co-founded by Chris Milk and Aaron Koblin, for Android and iPhones, recently hailed as best app/player experience in world of virtual reality by Apple Insider, which offers a range of rich Virtual Reality Experiences. As part of the series of films with the UN, the Vrse app also features the first film in this series, Clouds Over Sidra, about the Syrian refugee crisis.

Clouds Over Sidra was unveiled at Davos at the beginning of the year and is currently being used all over the world to raise money for refugees by the UN. It recently screened at the Third International Humanitarian Pledging Conference for Syria in Kuwait, and helped raise $3.8 billion in support of the humanitarian response.  The UN hopes to build on the success of Clouds with Waves of Grace and continue to decrease the gap between decision-makers and the issues they govern on.

Chris Milk says, "We so often wonder what we would do in a terrible situation. In Waves of Grace, we transport people into the epicenter of one of the worst epidemics in recent history. You literally come face to face with death.  But Decontee’s spirit pulls you up, and brings you through to the other side. ‘Waves of Grace' is the perfect example of how the power of faith, the resilience of humanity, and the transformative abilities of virtual reality, together can provide a deeper understanding of humanity.”

Vrse.works co-founder Patrick Milling-Smith says, “This partnership between Vrse.works and the UN has given rise to a new genre.  Virtual Reality is an unrivaled medium when it comes to creating empathy.  It is not simply about showing people these critical and urgent situations around the world but it is about taking the viewer right there and immersing them in situ to really feel a sense of presence.”

“We are profoundly changed by the brave people we have encountered and the beauty of spirit that we have witnessed.  I hope more people can watch these stories for themselves in virtual reality and be moved to action to help make a difference as a result.”

Since the outbreak began, roughly 27,500 confirmed, probable and suspected cases of Ebola have been reported in Guinea, Liberia and Sierra Leone (figures from July 2015). The fatality rate for those affected is just under 50%. The health epidemic has had the strongest impact on women and children, with 50.8% of deaths female, and an estimated 30,000 children orphaned by the disease.

“Development achievements can be quickly reversed due to crises such as the Ebola epidemic”, said Mitchell Toomey, Director of the UN Millennium Campaign. “If the world does not focus on helping the most vulnerable and on building resiliency in recovering communities, development goals and targets will not be met. It is hoped that this film can aid the United Nations’ efforts to draw attention to the lasting impact of the Ebola crisis, as well as the need for continued support for those affected by the disease.”

Although Liberia was declared Ebola free in May 2015, new cases continue from unknown sources and the virus is still active in the region.  Compounding the devastating effects of the virus is the difficult and socially challenging recovery and reintegration process. Individuals and communities declared disease-free can still face societal obstacles for long periods of time, and fight an additional battle to rejoin their communities, jobs, and even families.

“The Ebola crisis has captivated the world in its devastating effects over the last year and a half. However, the individual stories behind the numbers are often not told.  Decontee’s story captures the strife and spirit of the communities across West Africa in the wake of the Ebola epidemic. It is hoped that this second VR experience will promote greater understanding of the socio-economic impact of the disease and empathy for those who continue to overcome it,” said Gabo Arora, co-creator of the film and Senior Advisor for the UN Millennium Campaign.