We Are Many is the story of the biggest protest in the history of humanity, and how it changed the world. On 15th February 2003 tens of millions of people marched through the streets of 800 cities around the world to try to stop the war against Iraq. The inspiring story of how a handful of activists created a global movement on a completely unprecedented scale has never before been told.

We Are Many is also a devastating critique of our political system, and a chilling look at the dark underbelly of the war machine. The government launch the war in 2003 despite the massive protests, leaving many to feel that the protests had been a failure.

But against the odds, the activists never gave up, and the legacy of those mass global demonstrations can still be felt today. We Are Many reveals the unexpected ways that February 15th 2003 changed history, and launched a new era of peaceful people power that captures the zeitgeist of the first decade and a half of our 21st century.

Celebrating people power and exposing government lies, this thought-provoking documentary examines the first ever global demonstration, the protest against the Iraq War on 15th February 2003.

We Are Many tells the story of the many versus the few. The ‘few’ are the politicians who lied to their people to justify an illegal war. In particular, British Prime Minister Tony Blair and US President George W. Bush. The ‘many’ are the 15,000,000 people or more from every walk of life who saw through the lies and marched for peace.

This beautiful mass protest was the single largest mobilisation of people in the history of the world, yet its seismic impacts have remained largely untold…

“A President who has no foresight, who cannot think properly, is wanting to plunge the world into a holocaust” Nelson Mandela 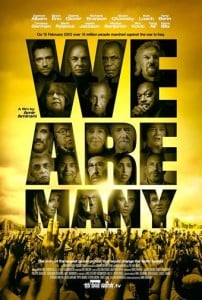 At its heart is the unrivalled drama of ordinary citizens rising up in peaceful unity against a tiny minority of powerful warmongers. In 800 cities across all seven continents, people who had never demonstrated before poured into the streets shouting “Don’t attack Iraq” and “Not in our name”.

This bold documentary by Amir Amirani (Hallelujah Hendrix, Supersonic Dream) explores how the demonstration was organised, recounts the optimism of the momentous day itself, and highlights its far-reaching effects.

From the South Pacific, through Asia and Africa, into Europe and America, even Antarctica, we see the amazing demonstrations in all their glory.

Over the past 15 years Amir Amirani has made films for some of British television’s most prestigious series, including Arena, Timewatch, Picture This, Correspondent and Newsnight. In films that have received critical acclaim Amir has covered the life and death of Concorde, the crazy world of awards and awards ceremonies, Jimi Hendrix’s house in London, music under Apartheid, the arms trade with Will Self, sex change in Iran and the horrors of chemical warfare in the Iran-Iraq war. Two of his documentaries have been nominated for an Amnesty International Award and One World Broadcasting Trust Award.

He went to the BBC in 1992 as a Graduate Production Trainee and two years later joined his brother Taghi is setting up Amirani Films, recently renamed Amirani Media. Amir has produced and presented programmes for BBC Radio 4. They include In Business, From Our Own Correspondent and documentaries on Iranian comedy and poetry. His journalism includes writing for The Guardian, New Statesman, New Scientist, Business Traveller Asia and the Economist Intelligence Unit. We Are Many is his first feature film.

Wael is the executive creative director of Iambic Dreams, where he writes and produces award-winning music. He is the creator of a 3D superhero brand, the Utopians Alliance. As well as We Are Many, he is the executive producer of Democrazy, which is in production and being directed by Andreas Dalsgaard. He is also directing his own documentary, My Ollie Nicholls Project, which is currently in production.

Omid Djalili is an internationally renowned stand-up comedian, and winner of the 2001 Time Out Comedy Award. He has appeared on numerous television shows in the UK and the US. He has also acted in films such as Mr Nice, Pirates of the Caribbean, Gladiator, Notting Hill and The Infidel, which he also executive produced.

Dominique Young Unique ‘Throw It Down’