Douglas Quaid (Farrell) is a factory worker haunted by vivid dreams indicating a past life as a spy, escaping his mundane existence by visiting Rekall – a future company providing implanted false memories of a life their clients would have liked to have lived, true memories of a forgotten past are vividly brought back to life as the factory worker turns renegade spy assisting a resistance movement opposed to the schemes of an oppressive government. (Trailer video below.)

Philip K. Dick’s back library of mind bending science fiction tackling themes of reality, technology, the nature of humanity and the bureaucratic nightmare have provided Hollywood with some truly original ideas.

Ridley Scott adapted the noir of Do Androids Dream of Electric Sheep for his seminal futuristic thriller Blade Runner (1982) whilst upcoming director George Nolfi tapped into Dick's back catalogue for the recent romantic thriller The Adjustment Bureau (2011).

One of Dick's most influential short stories was the mind bending and memory retrieval tale We Can Remember It For You Wholesale, a yarn which found its everyman protagonist seeking a fantasy implant only to awaken a past more vivid and dangerous than the fictional fantasies he has sought out.

The plot device was surely destined for an inevitable big screen adaptation with director Paul Verhoeven casting a square jawed Arnold Schwarzenegger in a highly enjoyable albeit mind bending action thriller loosely based on the source material and finding Schwarzenegger's average joe haunted by dreams of a past life on Mars and his role as a secret agent attempting to overthrow an oppressive regime.

The original feature has remained popular to this day, but given the current Hollywood trend to remake and reimage past classics, Total Recall is again with us in the form of film maker Len Wiseman and a darker grittier spin on the tale with Colin Farrell about to find his futuristic factory worker reawakening a past far removed from his current day job.

Does this new take on the premise warrant a remake?

Not really; but whilst the critics may have you believe that this new feature is a pointless and shallow exercise in Hollywood revisiting past glories, there is still fun to be had, as long as you leave your brain at the box office foyer as Wiseman embarks on an endless two hour rollercoaster ride of android bashing, car jumping, gun blazing that has Mars substituted for two polarised colonies (Britain and Australia) destined for war in a post apocalyptic future.

Some visually satisfying environments abound as the overcrowded and neon lit slum like qualities of The Colony (recalling the futuristic China Town of Blade Runner) contrast nicely with the gleaming white spires of a 22nd Century London.

Flying cars and androids, always a staple feature in Dick's fiction, are realised by some stylishly slick fx whilst the implanted hand phone is perhaps a warning to a generation increasingly attached to their mobile friend.

Amidst all the endlessly fast paced action sequences Kate Beckinsale perhaps steals the film in villainess mode with her man baiting, kick ass agent bent on giving Farrell an endlessly hard time whilst Farrell himself is likeable as the everyman turned resurgent gun blazing resistant fighter.

But even these qualities fail to hide the fact that this current interpretation is almost completely devoid of any subtext that would give the movie some grounding.

Whereas films such as Christopher Nolan's Inception (2010) examine the premise of dreams and memories to shape character and motive, Wiseman seemingly uses the theme as a device to launch from one grand set piece to another with an end result that we never really connect with the central character nor do we feel his disorientation as events unfurl around him.

Bill Nighy is given very little to play with as his enigmatic resistance leader appears in perhaps the shortest cameo of the year whilst Bryan Cranston's chief villain and future leader is so straight laced and matter of fact as to be almost uninteresting with no insight given into his grand scheme to effectively start World War IV.

Jessica Biel plays it by the book as the heroine and futuristic resistance fighter playing light to Beckinsale's darkness whilst the running time of over two hours combined with a lack of subtext may start to tire out some viewers as Wiseman's run of the mill thriller frantically races towards a predictable but visually stunning climax.

This new spin on Dick's short story is a glossy extended video game devoid of any deeper meaning and whilst the experience is fun while it lasts, this is one movie you may not find yourself recalling again.

Total Recall is currently on general release across UK cinemas. 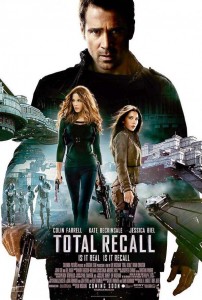 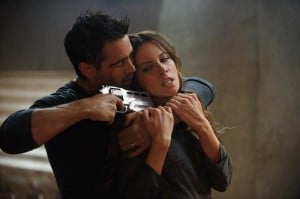