As Her Majesty’s government looks to mount legal proceeding in Europe over the horsemeat scandal, the rest of us consumers should be looking at those tins and packages of prepared foods already in our cupboards and asking ourselves what is really in them.

It looks like food testing will be centred on inspections to find out if what are labelled beef products really contain horsemeat. But one has to wonder that if, as Lord Haskins claims, there is endemic fraud in our food chain that thousands of ‘shadowy figures’ knew about then you can bet it is not limited to just one area or sector.

To add insult to injury the UK cannot impose a ban on the import of meat until it is established that there is a health risk. The environment secretary, Owen Paterson, told BBC Breakfast that “This is a case of fraud and a conspiracy against the public, this is a criminal action, substituting one material for another.” But he has already said that the government was powerless to stop meat imports unless it could be proved that it was a health risk because this lies within the purview of the European Commission.

Horsemeat is not a health risk to humans unless it has been treated with the anti-inflammatory drug “bute” (phenylbutazone), which can cause serious blood disorders in humans. The Food Standards Authority says that it has ordered testing for this substance to take place. And then of course there is the issue of the ‘standard’ of horsemeat involved; has it just been diverted from the knackers yard or pet food factory?

One also wonders whether or not we should be testing for such things as donkey, dog and cat meat just as a starter. As anyone who will willingly put horsemeat into burgers and ready meals would be quite prepared to use anything else they could get away with.

Our globalised food supply chain has grown so long and complicated that we have ended up having to trust authorities from the EU, individual countries and our own FSA to look after it all for us. But that trust has been found to be seriously misplaced and we appear to have learned nothing from the mad-cow disease episode of 1990. 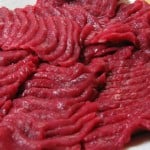 As Leo McKinstry says in the Express, “The intricacy of this labyrinth is eagerly exploited by gangs who use the meat trade as a cover for criminal activities. The combination of useless quango oversight and globalization has brought us to this equine crisis. Once more the British public has been betrayed by those who should be protecting us.”

We are now left with no say over our food and expensive legal battles in foreign countries. It is quite obvious that the UK must wrest the power of full control over its food supply back from the EU. Or better still leave altogether.

The first step we should all take though is to eat fresh meat from a butcher or supermarket that sources their produce locally. After all, we should know what we are feeding our children with.