With Julian Assange still holed up in the Ecuadorian embassy, Alex Gibney’s latest work once again taps into contemporary and fascinating subject matter. This new film – fully titled ‘We Steal Secrets: The Story of WikiLeaks’ – is somewhat hampered by only indirect access to its two stars, but nonetheless provides a detailed and unique glimpse into recent events.

After opening with a brief recap of the 1989 hacker attack on NASA’s network, Gibney jumps to the founding of Wikileaks in 2006 and then follows its meteoric rise and fall. The role of Wikileaks in exposing dubious practices at Icelandic bank Kaupthing, its first major success, is dwelt upon much more than revelations about tax dodging, toxic waste disposal or Kenyan corruption. But it is the leaked video footage of the attack on Reuters journalists and civilians in Baghdad by a US Apache helicopter that really hammers home the issues that WikiLeaks raised: the rights of ordinary people to understand what their government does on their behalf, and how it does it.

Gibney dwells on the Apache strike, exposing the brutality and callousness of modern warfare. But from there on the film takes a different tack, exploring the lives and motivations of the two central protagonists: Assange, and Bradley Manning, the US soldier who leaked the classified material.

Unable to obtain new access to either man, the film cleverly uses pre-shot footage of Assange, and simulates digital conversations Manning had with the hacker he chose to confide in. Gibney also gets around the difficulty of missing his two leading men by arraying an impressive assembly of interview subjects, including a former director of the NSA and CIA, the Director of the Information Security Oversight Office, and a number of Assange’s old colleagues. 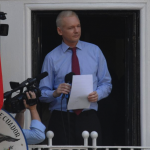 From there the story becomes more familiar, but Gibney succeeds in demystifying much of the hype around Assange by focusing on the first-hand accounts of those who saw events unfold. The changing perspectives of Assange’s former colleagues shine a powerful light on his character, and the brief interview with one of the women involved in the sexual assault allegations is particularly moving, delivering renewed perspective after all the noise and hype. Assange is revealed neither as a hero nor a demon, but merely a talented hacker whose paranoia and instant celebrity spiralled out of control. Manning is treated more sympathetically, with the transcripts of his conversations revealing his very real and distressing internal conflicts; still awaiting trial, he more than anyone else emerges as the victim of the piece.

For all the big questions about truth, secrets and cover-ups, at its heart this film tells an important story about human nature: two flawed men reacting to the flaws they see in the world around them. While not perfect itself by any means – some of the animations and links are grating, and at over two hours some fat could have been trimmed – this film is still well worth seeing for anyone with even a passing interest in recent events.