British people are far more likely to want to remain part of the EU if it leads to better pay and rights at work, according to new polling published by the TUC today (Tuesday).

The poll of 4,000 UK voters – commissioned from Greenberg Quinlan Rosner Research by the TUC – shows that 55 per cent of the public would be more supportive of Britain's membership of the EU if it did more to help working people get decent pay and conditions at work.

By contrast, fewer than one in four (23 per cent) say they would be more supportive of the UK’s EU membership if it did more to cut red tape on businesses.

The TUC says the poll should act as a warning to business leaders and politicians not to use re-negotiation to push for weaker rights at work. 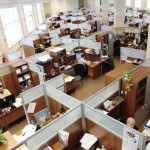 “This poll should be a warning shot to business leaders and politicians. If they opportunistically use re-negotiation to call for weaker employment rights they will make getting a ‘yes’ vote much harder.

“Support for staying in Europe will haemorrhage if ordinary Britons feel their working lives are going to be made worse.

“Chipping away at paid holidays, rest breaks, maternity rights and fair treatment for part-time and agency workers is the last thing people want.

“Europe is at its best when it meets the interests of both business and workers. Abandoning this blueprint would be a disaster for the UK and the EU.”

HSBC Launches Wi-Fi in Branches Around the UK