We're bullish on gold but listen to this bear too

When gold failed to hold above $1,800, I became skeptical. The stock market was on fire, so why would anyone want to buyÂ gold, as the easy money was already made? Then we saw gold spot prices fall below $1,700, $1,600, and then $1,500…when I turned bearish. (Read “Is Gold’s Near-Death Crisis Over-Exaggerated? Concerns of a Market Meltdown May Not Be.”)

Well, fast-forward four months, and I continue to be neutral-to-bearish. I just don’t see any point buying the precious metal at this time: there’s minimal inflation and the world is not going to blow up anytime soon, plus you have so much money funneled into stocks.

If I’m wrong, then so are investment gurus John Paulson and George Soros, who are running for the exits and divesting a major portion of their gold holdings. According to filings from the U.S. Securities and Exchange Commission, the SPDR Gold Trust run by Paulson sold off over half of its gold holdings in the second quarter. I simply wouldn’t be betting against these two.

The global demand is also at a four-year low, according to the World Gold Council. The organization attributed the decline to investors selling bullion funds and lower buying by the world central bankers. (Source: Harvey, J. “Gold demand hits 4-year low as investors pull out – WGC,” Reuters web site, August 15, 2013.)

The chart shows some support, but I believe prices could falter again towards the next Fibonacci Level, at around $1,210. Goldman Sachs has a $1,200 target on gold; failing to hold here, the metal could slide to around $1,050. 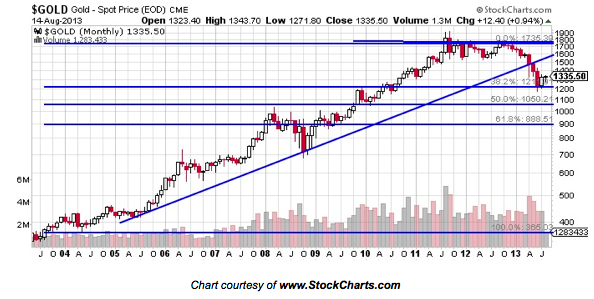 Whatever the situation, I still see more downside risk than upside potential, based on my technical analysis. The supporters will tell you how the metal is limited and how you need to accumulate positions. While I do agree with this, I just don’t feel it’s that time just yet.

Clegg airs his worries of a new debt crisis

Priced Out Of The Housing Market