What Are the Homebuilder Stocks Trying to Tell Us After Falling 20% Since May?

The U.S. housing market is “hot;” home prices are going up and up. At least that’s what the mainstream’s saying.

The S&P Case-Shiller 20-City Composite Home Price Index, considered a key indicator of the U.S housing market, increased to 159.18 in July. In June, it stood at 158.20. Since the beginning of the year, the index of home prices in 20 major cities in the U.S. economy has increased by roughly 7.5%. (Source: Federal Reserve Bank of St. Louis web site, last accessed September 24, 2013.)

Why isn’t this bullish news pushing up homebuilder stocks? Or more importantly, what are those leading indicator stocks trying to tell us by collapsing 20% since their May high?

As I continue to write in these pages, I am skeptical of the rise in home prices in the U.S. housing market. I believe the rebound in the housing market activity is a direct result of the Federal Reserve’s easy money and nothing else.

To have real growth in the housing market, you need buyers who are going to actually live in the homes they purchase. This analogy can also be used for other commodities. For example, to assess the condition in the copper market, if you see increased buying by companies that make copper products, this suggests there’s demand. On the contrary, if you see speculators, then you can assume they will bail as soon as they make some money on their trade.

The U.S. housing market has accumulated too many speculators. It is well documented in these pages how institutional investors are buying homes, fixing them up, and then renting them out.

For the housing market, one key indicator I follow is the activity of first-time home buyers—and they’re just not there in this recovery. 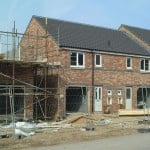 And mortgage rates have been rising. As rates increase, it makes homes less affordable for many buyers. 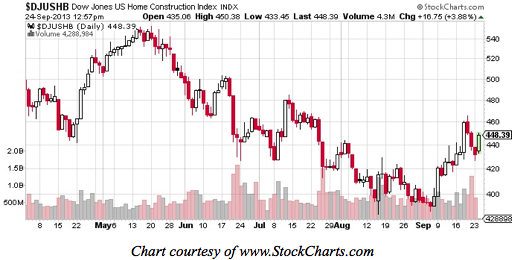 Homebuilder stocks, as the chart above illustrates, are down a little more than 20% since their May peak. I would not be surprised to see them decline further. As an investor, you know the stock market is a forward-looking animal. Homebuilder stocks declining so rapidly show investors don’t want to own them. And in the past, the action in homebuilder stocks has always led the direction of the housing market in the U.S. So next time you hear housing is making a “comeback,” remember what you just read here. All is not as rosy as it seems for the housing market.

Boy, they just don’t like gold bullion. The gold bears are getting excited over every negative movement in gold prices. As soon as the precious metal’s prices decline a little, we start to hear chants, like “Gold bullion is useless.” Sadly, most of the market is too focused on the short term—the daily, weekly, or even monthly fluctuations—which is wrong.

I keep my eye on the long-term picture.

Before going into any details, please look at the chart below of gold bullion prices since 1970. 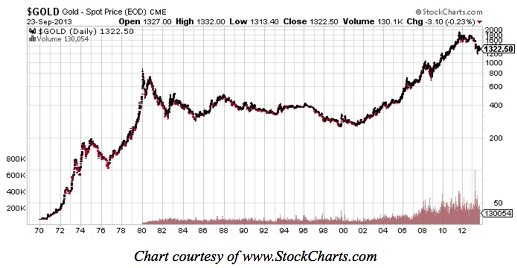 Looking at this chart, an observation one can make is that gold prices are known to have price swings, meaning they go up significantly and then come back down.

Moving forward, in August of 1976, we saw the beginning of another bull run in gold prices. This rise continued on until the beginning of 1980. In this period, the precious metal’s prices increased by more than 705%. From there, until June of 1982, gold bullion prices declined more than 63%.

From then on, the price of gold moved sideways for a while, but there were heavy fluctuations in between.

Then came 2001, when the precious metal found a bottom and started to go higher, increasing 291% until March of 2008. After this time, we saw a decline of almost 30% in a very short period.

Following this, another bull run was born. From then on, gold bullion prices increased about 170% until 2011, when the price hit $1,900 an ounce.

Since then, we have seen scrutiny. Gold prices made a low at around $1,200 an ounce—or a decline of about 35%—not too long ago.

Dear reader, the moral of the story is that the fluctuation we have seen in gold bullion prices is nothing new. My opinion? When the bears say gold bullion prices are in a “bubble,” they shouldn’t be trusted. We have seen all this in the past. The gold bears were wrong then; they are going to have the same fate again.

I continue to be bullish on gold bullion for the following reasons:

Central banks are still printing paper money, as their economies are still in trouble. They are fixated on printing to bring down the value of their currencies. But gold bullion is a global currency. To give you some idea about their sentiment, the president of Switzerland’s central bank, Thomas Jordan, said, “At the moment there’s no reason to discuss an exit of the cap—the minimum exchange rate is still very, very important.” (Source: “SNB Says Franc Ceiling ‘Essential’ to Protect Economy,” Bloomberg, September 19, 2013.) In other words, the central bank plans to keep printing its own currency. Eventually, all this paper money printing (with nothing backing the paper) will catch up with world central banks in a bad way.

Meanwhile, demand for gold bullion worldwide is increasing. The longer gold bullion prices remain stressed, the bigger the eventual impact on the supply side.

“If I had to pick one stock exchange that would rank as the best performer of 2007, it would be the TSX (Canada’s equivalent of the NYSE). Interest rates in Canada remain very low and they are not expected to rise any time soon. Americans looking to diversify their portfolios, both as a hedge against the U.S. dollar and a play on gold bullion’s price rise, should consider the TSX. Most brokers in the U.S. can buy stock on this exchange.” Michael Lombardi in Profit Confidential, February 8, 2007. The TSX was one of the top-performing stock markets in 2007, up nearly 20% for the year.