What are the most popular baby names in 2014?

The most popular first names given to babies born in England and wales in 2014 were Oliver and Amelia.

Amelia has been the most enduring popular name having been in top spot since 2011. Oliver has been the favourite name for new-born boys since 2013.

The list, compiled by the Office for National Statistics (ONS), "presents the 100 most popular first names for male and female babies born in England and Wales in 2014 and compares the rankings with those in 2004 and 2013".

Comparing boys' names over the last decade five are more enduring having appeared on the list in 2004 and 2014: Oliver, Jack, Thomas, James and William. With the girls’ names it was four: Olivia, Emily, Jessica and Sophie.

"The ONS data strongly correlates with the names our BabyCentre community are highlighting with their favourites. Traditional classics remain strong with 'Oliver' and 'Emily', 'James' and 'Sophie' having graced the top 10 for the last 30 years.

When it comes to boys names the 'royal effect' is taking effect. 'George' is in the top 10, as are George's Dad and uncle 'William' and 'Harry', all leading the country both in lineage and name. With another royal baby born this year, it will be interesting if Charlotte trends in 2015."

With girls names parents are being more experimental. Names ending in 'a' seem to be very popular in recent years, potentially due to their more continental sound, with 'Amelia' holding the top spot and 'Olivia' and 'Isla' coming in second and third. There is also a nod to celebrity baby names with 'Ava' coming in sixth, the name of Reese Witherspoon and Ryan Philippe's daughter and 'Poppy' coming in fifth, which is the name of Jamie Oliver's daughter.

Further down the list we are seeing a significant trend of parents registering a shortened form of a name, rather than registering the full name but using the shortened form. Examples of this for boys include Teddy, Freddie and Joey which have all risen in the top 100. Lottie, the shortened version of Charlotte, has shot 20 places up the list for girls."

The Top Ten Names for Boys and Girls 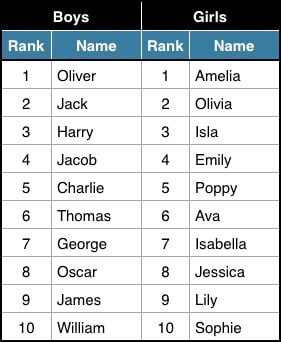 New and exciting websites in 2013

The 'net and neutrality

The contraceptive pill for men – how could it work?

Babies in Church: What You Need to Know About Catholic Baptism