What on earth is the PM playing at by queering the pitch with just about every major player in the European Union hierarchy over the appointment of Jean-Claude Juncker?

OK, it's said that Juncker's a bit of a toper, likes his cigarettes and is also too arch federalist for the likes of the UK, but we must remember he was chosen under the qualified majority voting (QMV) system rules that the UK has signed up to.

The Prime Minister knows this, but he has willingly followed a path that even the blind could see would lead him up the cul de sac of political isolation (both personal and national). And remember that he has stated in the past that he would fight 'heart and soul' for the UK to remain within the EU.

David Cameron has put a huge target on his chest and the opposition is having a field day, as is UKIP with Nigel Farage saying "David Cameron's response to Juncker's appointment shows that he is a loser who has learned nothing. If he had kept his cast-iron guarantee of a referendum on the Lisbon Treaty he would not be in this parlous situation."

But there are aspects of this affair that bear a little more scrutiny and thought on the back of a general election taking place within a year and the huge extension of QMV taking place on 1st November this year that passes yet more power to the EU. 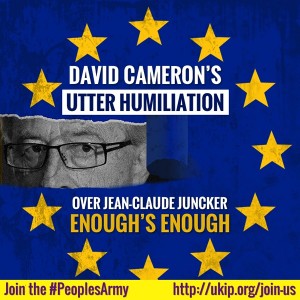 The first is that Labour may well win the general election next year. Now the PM knows that, with the extension in QMV and the related diminishing of the UK's power to influence decisions (there is no veto), Labour will be an easy target every time they fail to hold sway in the EU, but only if the Tories were seen to take some sort of firm stance. 'We stood up to the appointment of Juncker because it was right to do so, but Labour cave in every time' they would crow as defeat after defeat at the hands of the EU under QMV hit a Labour government.

Then there is the fact that Juncker was chosen under that same QMV system. So in future Cameron (or his successor) can threaten to cause the same sort of furore over any other QMV issue that the UK doesn't like in future. Many in the EU won't like the spotlight being shone on some aspects of QMV as it might encourage others to shout loudly instead of all just being 'gentlemanly' and accepting the vote – even if that vote is of great disadvantage to their own country. Remember, the voting is all about benefiting the EU as a whole, not individual nations – in fact it will nearly always be at the expense of the richer nations. So these politicians are expected to just go back home and 'sell' the result to their own electorates – and the peoples of those nations will accept national 'red lines' being crossed as long as domestic politicians don't make a scene.

Cameron may also be hoping to pick up a few votes by convincing people that he has the vitamins to stand up to the EU and will get to negotiate his 'reforms'.

So David Cameron may well have played a long game and gambled on spending a bit of political capital now in the hope of regaining it in spades in future.

Or is he just an idiot who has fiddled while the federalist Juncker takes the reins and 'reforms' the states of the EU into a federal state?