Last week was not a great week for chart watchers. The DOW lost 223 points on Monday and Tuesday and was down another 225 points to below 17,000 on Thursday morning.

What concerns me is that this is the sixth time the DOW has failed to hold above 17,000, which is a red flag that suggests vulnerability is on the horizon. There clearly appears to be a multiple top formation in place that could be difficult to break in the short-term, based on my technical analysis.

The small-cap Russell 2000 is also in trouble after the emergence of a bearish death cross on the chart last week when the 50-day moving average (MA) fell below the 200-day MA. Small-cap stocks tend to have a higher beta and generally are the first to be dumped as overall stock market risk rises. 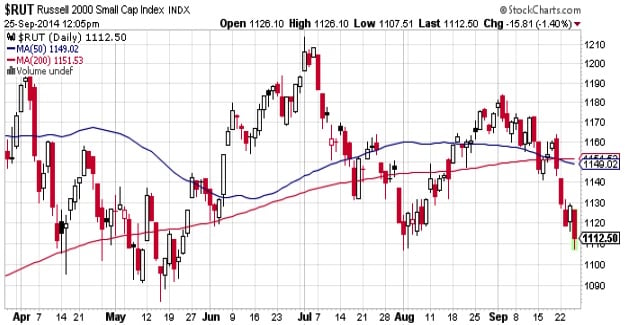 At this point, you will need to be careful, especially when looking at higher-risk stocks.

Just like in sports, you will need a sound defense as part of your overall portfolio strategy. In sports, a strong defense is what leads to a win. The same can be said for the stock market.

The stock market is in its fifth year of growth. The S&P 500 is up 200% in that time. Given this and the fact that the economy and corporate profits are not growing rapidly, it would not be a surprise to see a stock market correction in the works.

The chart of the S&P 500 shows we have not had a stock market adjustment for quite some time and are due for one. 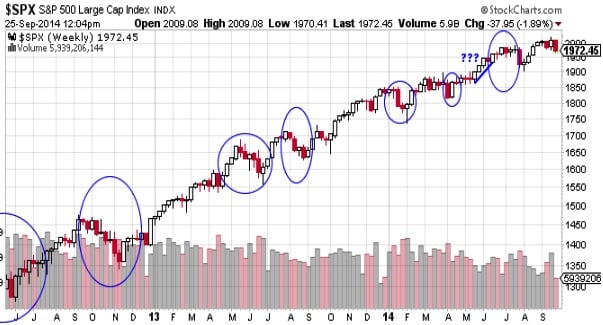 This may or may not materialize, but you should be prepared.

Now, I’m not suggesting the bull market is dead; I’m simply saying that we could see a pause and possibly more downside moves in the stock market when interest rates head higher sometime in 2015. The money printing presses have dried up. Now, it’s back to reality.

A sound defense in the stock market implies a host of strategies, including taking some profits, setting up stop loss sell orders, staying on the sidelines, and considering put hedges.

For those of you who were active during the 1999–2000 stock market bull run, the use of put options would have helped to protect your gains after the NASDAQ collapsed.

Today, you could consider buying put options on individual stocks, an index, or an exchange-traded fund (ETF) that closely emulates your holdings.

For example, if you are invested in technology, you can hedge via put options on the PowerShares QQQ (NASDAQ/QQQ) ETF.
If you hold blue chips, you could use the SPDR Dow Jones Industrial Average ETF (NYSE/DIA), or for the broader stock market, you could consider the SPDR S&P 500 ETF (NYSEArca/SPY). Finally, for small-cap protection, you can establish put options on the iShares Russell 2000 (NYSEArca/IWM).

This article What It Means: Dow Fails to Hold Above 17,000 for Sixth Time was originally posted at Daily Gains Letter.

IAG and RPC Group Rated by The Share Centre