What should Osborne announce in the budget?

Leaving aside the calls that he should either announce his resignation or be sacked one can only assume that we can only expect a bit of tinkering around the fringes of the Chancellor’s ‘Plan A’. (A standing for austerity.)

The chances of Osborne chucking it in for the back benches appear low, or he’d have done it already.

And on the possibility of the PM sacking his buddy, maybe he’s already been quietly touting for a replacement. But can you imagine the look of horror on the unfortunate target’s face and the bleat of ‘what have I done to offend you Prime Minister, that you’d sentence me to responsibility for this doomed economy?’ Anyway who, apart from a complete megalomaniac totally convinced of their own invincibility or a rhino-skinned MP desperate for the money, would want that poisoned chalice? Would you? Imagine in which direction the fingers will be pointing after the carnage of the next general election. Then again Mrs May is a possible candidate given the leadership challenge talk humming over the wires recently – did you see where she was standing in PMQs today?

Anyway, the UK has seen depressed growth as well as an even larger vacuum pulled on the economy than the last Labour government could achieve. Remember the note left by Labour’s out-going Treasury Secretary, Liam Byrne, for the incoming David Laws saying that there’s no money left? Well, the coalition has spent even more – clever them they found some. Since the last general election the country’s overall debt pile has ballooned, despite the PM’s claims to have ‘paid the deficit down’ (the deficit of course not being the overall debt – it is just what we have added to it this year).

The Chancellor has also failed his own central test by having the UK economy downgraded from Triple A by one of the rating agencies.

The coalition is caught in a desperate battle for growth with no idea of where the money to buy it is going to come from, that’s right it seems we need to purchase growth. The government can only borrow. It can’t tax more as the poor don’t have it and the rich will just export and hide it. It can’t cut too quickly or too far because it will be the poor and the vulnerable that take the beating. And remember that governments get voted in by making promises about how they’ll make these things better than the last lot and that takes money. Lastly no-one’s spending, either here or abroad.

“Halfway through the current Parliament, the government’s strategy of combining austerity with recovery is having at best mixed results. The economy has been pretty much flat, the budget deficit has not fallen nearly as quickly as originally envisaged and the last few years have been characterised by downward revisions to growth and upward revisions to public borrowing.

“Having delivered the latest dose of bad news as recently as December’s Autumn Statement – a further delayed and weaker recovery, more austerity measures in the next Parliament and the probable overshoot of the debt target – the Chancellor should be able to avoid announcing further significant downgrades in the Budget on March 20.

“However, good news will be in equally short supply. There has been a hesitant start to the year but even if the economic forecast stands, growth around 1% this year and 2% next is still weak by historical standards. Meanwhile, on a like-for-like basis public borrowing for 2012/13 looks likely to exceed December’s forecast, albeit marginally, rather than coming in lower than last year as promised.

“So the government’s self-imposed deficit reduction straitjacket – in the Prime Minister’s words “this month’s Budget will be about sticking to the course” – leaves little room for manoeuvre. Within its constraints there may be some scope to get more bang per buck in order to stimulate some much needed demand, for example with increased government investment financed by savings elsewhere. There are also likely to be more low-cost measures such as abolition of red tape and to improve labour market flexibility. But a significant net fiscal boost along the lines of the Business Secretary’s “Plan A-plus” (a new programme of infrastructure spending financed by extra borrowing) would be ruled out, within that framework.

“If “fiscal conservatism” remains the order of the day, what about the “monetary activism” which is meant to accompany it? Speculation is mounting that, ahead of the arrival of the new Bank of England Governor in July, the Chancellor may change the Monetary Policy Committee’s remit. The aim would be to allow a looser monetary policy aimed at boosting growth – but isn’t that what the MPC has been pursuing anyway?” 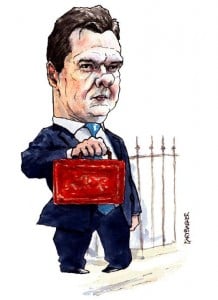 And John Williams Managing Partner at Kuber Ventures is asking for a strong strategy:

“The difficulty that the Government has faced with the Funding for Lending Scheme is that it has been reliant on third party involvement via banks that it only has partial influence over.

“Alternative investment schemes where the Government has influenced funding into small businesses directly via tax incentives have had much more of an impact in stimulating small business growth. For instance, HMRC has received over 1,000 applications by UK companies for SEIS investment since its launch in 2012.

“With the Budget approaching it is important that the Government recognises the schemes that work and those that don’t and how, by directly influencing investment, it can make a real difference.

“The Government must continue to make the investment case for EIS, VCT and SEIS genuinely compelling if it is to bolster small businesses and get the UK economy back on track.”

Germany wants its gold back

Fred Goodwin was a scapegoat say politicians and business leaders