Black Friday was an afterthought, to me at least. Yes, I bought a few items from the MLB store, but that’s it. But according to newly released data for this key shopping day, it appears as though I wasn’t alone.

Well, it appears the retailers may have been right in their assessments, as results from Black Friday point to some disappointing sales with a retail sector in search of consumers and margins. The problem is consumers are looking for deals and discounts; they’re not opening up their wallets in a mad dash to the register.

So despite earlier store openings, extended store hours, and heavy advertising leading up to Black Friday, the big day that many retailers depend on, the early estimates show Thanksgiving weekend retail sales declined 2.7% year-over-year to $57.4 billion, based on a report by the National Retail Federation (NRF). Even so, the NRF still estimates retail sales will edge up 3.9% during the holiday shopping season.

I can’t say I’m surprised. The reality is consumer confidence remains shaky, and with the jobs market being as soft as it is, consumers are clearly reluctant to spend. The impact on the fourth-quarter gross domestic product (GDP) growth will surely be felt, since consumer spending accounts for about two-thirds of America’s GDP. 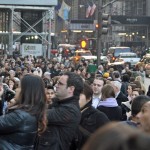 And according to ShopperTrak, sales on Black Friday fell 13% and traffic was down 11% year-over-year. (Source: Banjo, S., “Holiday Sales Sag Despite Blitz of Deals,” Wall Street Journal, December 2, 2013.)

What makes the results even more disappointing is that the availability of cheap financing created by the Federal Reserve’s quantitative easing programs cannot get consumers to spend. As I have written numerous occasions, this is not a good sign, especially with the cheap money and stock market wealth. The Fed really needs to rethink its strategy.

For the investor, I would be careful when considering buying stocks in the retail sector at this time. There are, however, some areas that could continue to deliver strong retail sector results, such as the luxury brand stocks. (The wealthy aren’t so worried about their wallets.) My favorites in this area are Michael Kors Holdings Limited (NYSE/KORS) and Tiffany & Co. (NYSE/TIF).