What's Happening in This Stock Market Reminds Me of 1999…

Some of you might have been active investors in the bull market during the late 90s, as I was, witnessing the S&P 500 soar during that decade. In fact, the bull market was so strong back then that it created a false sense of confidence, as many people quit their regular jobs to become traders. As we all know, this didn't last forever and the S&P 500 bull market popped and sold off sharply.

Just a couple of days ago, I read an interesting article about how small investors are back, seduced by the bull market, which has resulted in a very strong performance for the S&P 500 over the past few years.

There is nothing wrong with enjoying this bull market move, but when everyone thinks they are an exceptional trader over a short period of time, this worries me.

In the article, the active investor is an equipment salesman who is now "considering quitting his job to trade full time." (Source: Light, J. and Steinberg, J., "Small Investors Jump Back into the Trading Game," Wall Street Journal, February 21, 2014.)

This is what happens in a bull market; the consistent strength lulls people into believing they are somehow able to predict the future, when just a couple of years ago, they had no clue how to make money in the stock market.

That is the real test for investors—will your strategy work through a bear market as well as through a bull market? Just because you keep buying every dip in the S&P 500 and have, so far, been rewarded, this is not an actual investment strategy that will work over the long-term.

I fully advocate more people becoming long-term investors, but this trend to short-term speculation will eventually lead to significant losses. It's only a matter of time. The market is cyclical, meaning every bull market ends and becomes a bear market, which then ends and becomes yet another bull market, and so on.

How strong do you think the bull market will be in the second half of this year as investors begin pricing in higher interest rates in 2015? I think the S&P 500 will continue moving higher until we get clarity regarding the timing of the first interest rate hike.

Until interest rates start increasing, both in the short-term and long-term space, I would look to companies that are benefiting from the monetary policy programs. 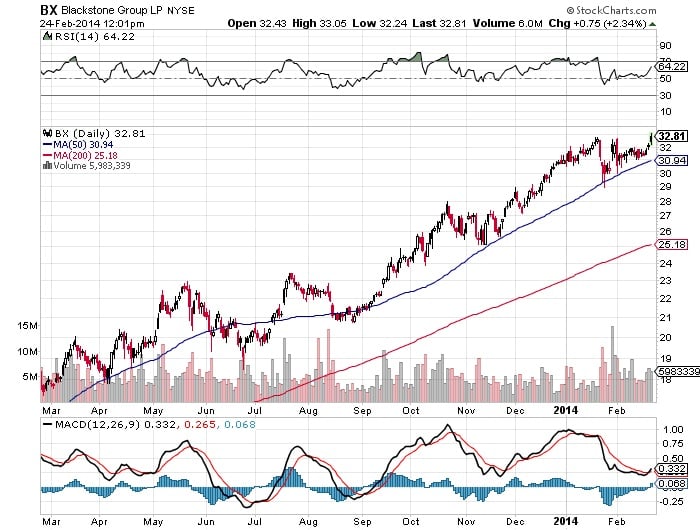 The shares of The Blackstone Group L.P. (NYSE/BX) have clearly been a strong performer over the past year, and they will continue to benefit from the global push by central banks to keep interest rates low.

Blackstone is a very diversified company that has investments in many sectors around the world. The company has become the largest rental play in America, spending billions of dollars on buying thousands of homes. We all know how strong real estate has been since the Federal Reserve has stepped in to support that market.

Now Blackstone is looking at real estate in other cheap markets, such as Spain. In fact, I think this is a good move, since the European Central Bank is more inclined to lower interest rates than raise them when compared to the Federal Reserve.

This bull market is getting old, but the game of musical chairs continues. So long as the Federal Reserve continues its easy monetary policy, the S&P 500 will benefit and the flow of funds will be pumped into the market. But once the music stops, I think the S&P 500 will suffer a significant shock.

I would continue to recommend investments such as Blackstone that are benefiting from easy monetary conditions globally, for as long as the conditions hold, these stocks should see their assets and revenue increase.

This article What's Happening in This Stock Market Reminds Me of 1999… by Sasha Cekerevac, BA was originally published at Daily Gains Letter.

Why plants in the office make us more productive