Midland Parking Contracts, based in Redditch, may have made as much as Â£500,000 the court heard as they intimidated drivers on 19 sites across the West Midlands into parting with their cash to release the clamps as well as cancelling tow truck call-outs, sometimes as much as Â£335.

In many cases vulnerable people were targeted, the court was told, with 'No Parking' signs being intentionally hidden or obstructed as well as being put up after the clamping had taken place.

Some of those targeted were water and power meter readers, a disabled woman with a blue parking badge and even an NHS worker transporting blood samples.

A joint operation between West Mercia Police and Worcestershire trading standards was set up after reams of complaints from the public, which led to the shutting down of this scam.

As a result the 38 year old business owner and ‘main man’, Andrew Minshull of Hatfield Close , Redditch, was jailed by Judge John Cavell to 32 months inside while his ex-partner and ‘public face of the company’, Debbie Worton received a 12 month sentence.

Of the other three defendants, Simon Barry, 38, of Lilac Close, Evesham, was sentenced to 21 months in jail while Faisal Qadeer, 35, of Mount Pleasant, Redditch, and Christopher Cartwright, 31, of Salisbury Drive, Kidderminster, were both jailed for 15 months. 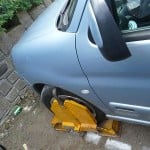 Barry was said to be the one to liaise with landowners and participate in clamping, with Cartwright and Qadeer being the main ‘frontline operatives’ who selected their vulnerable targets. Their actions were then, said the judge, offensive and intimidating.

The judge told the defendants "It is of course something that most people accept that illegal parking can cause very real problems to traders and other people and there can be no reasonable objection to the control of illegal parking by legitimate and proper enforcement. What of course is wholly wrong is the use of enforcement measures not to provide a service to help traders and others suffering from illegally parked cars, but to use the company as a vehicle to obtain money dishonestly from the public by blatant abuse of authority and power. In my judgment that is plainly what happened in this case."

All five had already pleaded guilty to the charges of conspiracy to defraud in January.

A further sixth defendant Lloyd Isherwood, 39, of Groveley Lane, Birmingham, who also admitted guilt is set to be sentenced in the future.

CHART OF THE WEEK: Global Debt