When will it ever end with Barclays? 2 scandals in 24 hrs

Barclays has been hit by two new scandals in 24 hours just as they started a charm offensive to entice their lost customers back with 7-day switching.

As Barclays boss Anthony Jenkins was congratulating himself for several 7-day switching TV appearances, where he tried to persuade customers that the bank had changed, news was already breaking that they were to be slapped with a £50m fine by the FCA for their 'failure to act with integrity' in their 2008 Qatari deal.

Then staggering news arrived today that 5 years ago they had incorrectly charged interest to personal loan customers after making mistakes on their paperwork, breaching the Consumer Credit Act on personal loans. Barclays have admitted the fault and will have to pay back hundreds of millions to customers entitled to have their interest payments returned. The bank admits it could also affect Barclaycard customers.

"Barclays lost over half a million current account customers alone in the last year. If they think they can win them back by covering up scandal after scandal with PR spin, then they don't know the British public" said Laura Willoughby MBE, from campaign group moveyourmoney.org.uk.

"They came bottom of the switching scorecard we released yesterday [1] – we had not factored in that it would need to go into negative figures.[4] It shows just how deep the rot within the organisation is; it will take years not weeks to turn a bad bank like Barclays around." 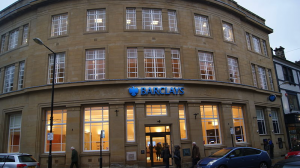 Basket of goods and services changes